BY T MICHELE WALKER – After a summer of being closed due to COVID restrictions, musical theater summer camp is back on stage at The Lemon Bay High School Theater. From the looks of it, the children couldn’t be more thrilled.

That’s not to say that camp wasn’t held last year. After all, “The show must go on” is a phrase invented by theater folk. According to Sarah Ballard-Richardson, director of the Lemon Bay High School theater program and the summer camp director, “Last year we held a camp at Fellowship Church since we couldn’t hold it at school due to COVID restrictions.”

Thanks to their flexibility and can-do spirit, children from the community had the opportunity to perform “Shrek, the Musical” last summer while most of the country was shut down.

There is something timeless about walking into a theater. Perhaps it’s the fact that the outdoor lights don’t permeate the room, or that stage lights are being used giving the theater an other-worldly glow, or maybe it’s the ominous stage itself, but a theater has a way of removing one from daily life and becoming its own small world. A theater holds a sense of excitement, and the Lemon Bay High School stage is no exception.

The children are milling about, dressed in their costumes, and ready to begin their dress rehearsal for “Seussical the Musical, Junior.” The theater is running amok with turtles, birds, cats, and an assorted array of brightly colored Seussical characters. “Who knows how to French braid?” Ballard-Richardson called out, as she pulled The Cat in the Hat’s hair out of her face.

Assisting Ballard-Richardson are some of her Lemon Bay High School students, students she has been working with all last year and are as trained to assist as any professional in the field. These assistants managed to run the light board, sound, spotlights, cue, and assist with the cast, and that is just the tip of the iceberg. The support they provide goes even deeper as they encouraged all the children.

There is one child, a young girl probably around six years old, who seemed particularly nervous to go on stage. The assistants pulled her aside and gave her a pep talk worthy of the “Gipper” speech. With newfound confidence, she toddled up on the stage and joined the cast in the opening number.

It’s this “It takes a village” approach to the theater that makes it the success it is. Not every child who decides to try theater does it to be a professional actor or actress, just as not every child who joins the football team has the desire to play in the NFL. The benefits of participating in theater are significant. “Students develop the ability to work with others toward a common goal, they learn communication skills and can use acting and singing as a positive coping mechanism for stress, anxiety, and depression,” explained Ballard-Richardson.

Activities from golf, baseball, music, and theater, provide discipline for children and a way to develop skills that build confidence. Ballard-Richardson can attest to the change she sees in her students. “The number one change I see in campers is an increase in confidence. Being on a stage in front of so many people can be daunting, but when they feel the rush of adrenaline and hear the roars of the crowd, they want to do it again. The confidence also generalizes into their regular lives. Many parents say that being a part of a production helped their child ‘come out of their shell.’”

“Places for the top of the show,” called Ballard-Richardson, which was met by a few murmurs from the cast. “I say, ‘Places,’ you say, ‘Thank you, places,’” she repeats, as she teaches her cast members theater protocol. The children repeat after their director, “Thank you, places.”

It’s a thrill when the opening number began, and the children flooded the stage with their megawatt energy and vitality. There was nothing but passion in every child’s eyes as each was given a solo in the opening number, their time to shine. 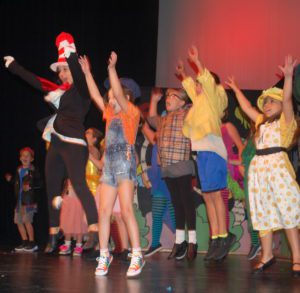 The moment came when that one child, the girl who had been hesitant, stepped forward to sing her solo. She didn’t just sing her solo, she nailed it with such gusto that the helpers in the audience spontaneously applauded and shouted with joy. Ballard-Richardson wiped away tears. Moments like these are what teachers live for.

“The most rewarding thing is to see how much can be done when the synergy of the cast and crew comes together,” explained Ballard-Richardson. “One plus one no longer equals two, it increases exponentially and so much can be accomplished in such a short period of time.”