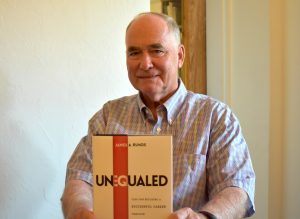 Boca Grande resident and expert banker Jim Runde shared his knowledge of trade and tariffs at the 2018 Economic Summit that took place on the island in February. He was part of a panel with four other members of the Boca Economics Group. They shared recent economic news and trends and discussed current macroeconomic issues with the crowd.

Jim is a Wall Street investment banker and corporate director specializing in strategic and financial advice. He is an advisory director and former vice-chairman of Morgan Stanley.

The Boca Economics Group was organized about 10 years ago by Boca Grande residents John Kissinger and Mike Giobbe. Jim has been a member since 2014.

The members started getting together monthly with several like-minded residents interested in studying and discussing economic issues. Since then they’ve been meeting on a monthly basis, and five years ago they decided to put together an annual economic summit and invite the community to attend.

In May 2014, Jim celebrated a rare milestone on Wall Street – 40 years as an investment banker, all at the same firm.

Throughout his career, he has worked on worldwide corporate projects. In 1999, he led the largest IPO transaction in history: United Parcel Service. The Wall Street Journal did a story and asked him how he was able to land that opportunity.

“It was the biggest deal in history, and it was because I focused on three things – adaptability, collaboration and empathy,” Runde said.

Staff from Columbia University saw the article and contacted Runde to ask if he’d be interested in giving a presentation about his theories. So he led a discussion at Columbia Business school, then spoke at IBM, and finally presented it to the staff at Morgan Stanley.

Jim has spoken at Princeton, Stanford and Harvard, as well as several large law firms around the world.

“I did shows in London, Paris and Frankfurt, and a video presentation in Hong Kong,” he said.

In his book, “Unequaled: Tips for Building a Successful Career through Emotional Intelligence,” published in 2016, he breaks down these three ideas.

Adaptability is essentially self-awareness, collaboration is the ability to work well with others and form networks, and empathy is the ability to relate and create trust with a client when it comes to a business transaction.

“It’s all about relationships and how you treat every single situation you encounter every single day,” he said.

The book is dedicated to his wife, Barbara, and is currently available via the Lee County Library system. It can be found at the Johann Fust Community Library under the “Island Authors” section.

Jim and Barbara live in Boca Grande most of the year. Jim was born in Sparta, a small town in Wisconsin. He is the second-oldest of 10 children. His mom and dad were both elementary school teachers.

“My parents put a great amount of emphasis on education,” Jim said. “We didn’t have much when it came to economic resources, but we were encouraged to be excellent students – and that was the magic carpet.”

All ten of the children earned advanced degrees.

After graduating from high school, Jim attended college on a full scholarship through the U.S. Navy R.O.T.C. program. The Navy paid for four years of college, and in return for that, Jim served for five years as an officer.

He attended Marquette University in Milwaukee and majored in electrical engineering.

Starting in 1969, he served as an officer in the U.S. Navy for five years on the nuclear energy staff of Admiral Rickover.

“He offered me a job designing and helping build submarines.”

While on active duty as an officer, he found himself more interested in solving financial problems than engineering problems, so he attended George Washington University School of Business at night and earned a master’s degree in finance, using the GI Bill to pay for the courses.

The Rickover job was a five-year project, and when that ended, Jim immediately went to work for Morgan Stanley on Wall Street.

He started out as an associate investment banker and dealt with large companies in corporate finance.

Jim dealt mainly with CEOs and corporate executives, buying and selling companies. He also helped some go public on the stock market.

As his career continued to grow, he eventually worked his way up to vice- chairman.

He was in charge of global transportation corporations, working with airlines, railroads and United Parcel Service. He helped CEOs with their strategic and financial questions.

“I assisted in situations like what subsidiaries they should buy and sell, and how to get stock prices and dividends up, or how to defend a company during a hostile takeover

After he retired, he stayed on as a consultant with Morgan Stanley. He is currently an advisory director of the company. He is also a director of the Kroger Company in Cincinnati.

About ten years ago, when Jim and Barbara were living in New York, some friends introduced them to Boca Grande.

They came for a vacation and stayed at The Gasparilla Inn. They enjoyed the island so much that they purchased a home here in 2014.

After spending the winter here, they will head up to Massachusetts in May to enjoy the summer months in Nantucket.

Jim and Barbara have three children: Dan, Kevin and Kate. They have five grandchildren.

Dan lives in Virginia, Kate is in Connecticut, and Kevin lives in California.

“All of them enjoy coming to Boca Grande, and they visit for spring break, which is great,” Jim said.

When he is not consulting, Jim stays busy with various organizations in Boca Grande.

Barbara is very active in the Boca Grande Garden Club.

Jim and Barbara have been married for 49 years. They like to travel, and they recently returned from Central America.

“We were there exploring the Mayan ruins, and we enjoyed the many tropical birds in Guatemala … but our favorite place is Italy; we’ve been there several times.”

His book, “Unequaled: Tips for Building a Successful Career through Emotional Intelligence,” published in 2016, is available on Amazon in hardcover, electronic version and audio book.