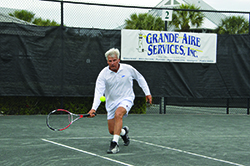 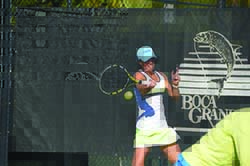 BY JEN FIERS – The 2016 Pro Tennis Exhibition Series will be held this spring each Wednesday at 4:00 pm at the Boca Grande Club from February 3rd to March 16th. The Series, with proceeds benefitting the Suncoast Humane Society, will include eight men and eight women competing for over $5,000 in prize money. There will be three men’s doubles matches and three women’s doubles matches, with a mixed doubles match to round off the event. This is the seventh week of an eight-week article series profiling all sixteen players before the event.

Last year’s Series Champion, Jessica Steck, is returning to the Series this year to defend her title. Having played in all four Grand Slams throughout her professional career, the former South African Federation Cup player’s impressive resume includes the 1996 U.S. Open Junior Doubles title, a professional world ranking of 54 in doubles and 120 in singles, and a win over the #1 doubles team in the world of Rennae Stubbs and Lisa Raymond. Steck now competes in outrigger canoe and paddle board racing and is the owner and founder of Sarasota Paddle and Fitness Co.

As one of the top collegiate players in the nation, Wetzel was voted MVP all four years in collegiate competition and played professionally for several years before embarking on his professional teaching career.

The Pro Tennis Exhibition Series kicks off with The Tennis Ball on Wednesday, Jan. 27 at 6 p.m. at the Boca Grande Club. A live auction has been added to this year’s Tennis Ball Fete for Pets, to benefit the Suncoast Humane Society. Kennedy Bros. Auctioneers of St. Petersburg will conduct the auction.

One of the many items to be auctioned is a $1,500 gift certificate from Seaside Casual Furniture.