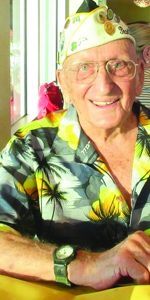 BY SUE ERWIN – The GoFundMe account to help send a veteran to the 75th anniversary of Pearl Harbor on December 7, 2016 has grown to nearly $1,900. But donations are still needed to help send Englewood resident John Seelie to the services in Hawaii.

Gasparilla Inn Golf Course employee Cathy Joel lives next door to Seelie, and the two have been friends for a few years. She thought it would be nice to set up the account to help John return to the site and attend the ceremony.

Seelie was a 19-year-old soldier stationed at Schofield Barricks on the morning of the attack on Pearl Harbor. He not only fought at Pearl Harbor but also at the Battle of Guadalcanal in World War II.

“I’ve served in several battles, but I think I’m probably one of the last men standing from the Pearl Harbor attack,” Seelie said.

Joel said Seelie is in great shape, and he works out at the Englewood YMCA several times each week. Until he was 88, he would ride his bicycle from Englewood to Boca Grande a few times each week, stopping for coffee and then returning home.

Mike Cahill met Seelie a few years ago, and the two have become great friends.

“He is such a sharp guy, with an amazing sense of humor,” Cahill said.

Seelie told Cahill that for the first time in 74 years, he put on some boxing gloves recently at the gym and hit the heavy bag.

“The background of this story is that John was 29 – 0 as a boxer in the Army. He was scheduled to box on the evening of December 7, 1941. He told me over a waffles breakfast some time ago that due to his service, he never put on boxing gloves again until recently, at the age of 93,” Cahill said.

Cahill took John to dinner on July 4, 2016. “He wore his Pearl Harbor Survivor hat and his flowered shirt. Nobody approached him until he was finished with his dinner. Then it was nonstop hugs, kisses, handshakes and pictures,” Cahill said.

Joel is ecstatic that people have been so generous in support of her mission. “I really want to thank everyone who made donations to make this trip possible,” she said. “I am so grateful to the Boca Grande community for choosing to be a part of this,” she said.

Cahill and Joel recently contacted three artists: Rob Hamilton, Randy Martin and Haley Nixon, to assist in a project for Seelie. The three are working on a 1941 United States Army-issued jacket. They’re planning to add authentic U.S. Army eagle buttons to it. The plan is to give it to Seelie on Veteran’s Day in November, a few weeks before he leaves for Pearl Harbor to attend the ceremony to mark the 75th anniversary of the attack. They’re also creating a special shirt for Seelie to wear at the ceremony.