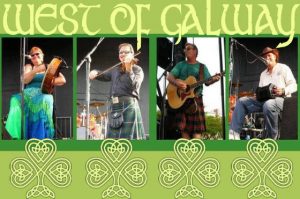 – Keep your St. Patrick’s Day mood going all throughout the weekend and come listen to the West of Galway perform Irish music on Sunday, March 19 at 5 p.m. Bring your golf carts, chairs and blankets, head on down to the Boca Grande Community Center and enjoy some good, live Irish entertainment during this two-hour concert.

Based in Naples, West of Galway has been entertaining crowds throughout the state as well as up and down the eastern coast of the nation for more than a decade. Known as one of Florida’s premier Irish bands, the group has won both national and international competitions.

“We have been together since 2003, and we have known each other for a much longer time,” Green said. “We met at the Irish-American Club in Naples.”

He said the band members were all good friends before they started playing together. And it was not unusual for them to play informally from time to time.

“Even though we were from different areas of the country, we all had the same kind of background, growing up in Irish families. So it just felt natural to play music together, and we love to share that feeling with our fans.” Green said the band members are very excited to play in Boca Grande, this being their first time performing on the island.

“We’re very happy to be invited to play here. We’ve been very blessed to be successful in what we do.”

In case you’d like a sneak preview, the band will be performing at Fitzgerald’s Irish Pub in Bonita Springs from 6 p.m. to 10 p.m. tonight. West of Galway competed in and won an international battle-of-the-bands contest in 2010 and subsequently was invited to play at the Celtic Fusion Music Arts Festival in Ireland. With band members mixing vocals, guitars, fiddles, whistles, and even bones, the upbeat tempos of these traditional Irish tunes will make you want to get up and dance on the green.

“We are a real Irish band, and we will be playing popular pub songs like ‘Whiskey in the Jar’ and others that you might hear while stepping into a pub in Dublin,” Green said.

Organizers encourage guests to come early, because this annual free concert sponsored by the Friends of Boca Grande Community Center usually fills up fast. The Community Center is located at 131 First Street. West of Galway is available for Irish and Celtic events, festivals, parties and weddings.

For more information on, visit west-of-galway.com.