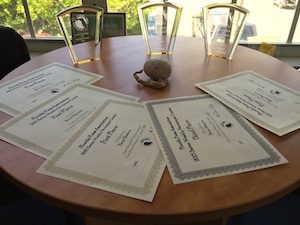 The Boca Beacon’s indomitable team spirit showed through once again as the 2016 Florida Press Association Better Weekly Newspaper Contest rained down four first place awards and a third place award upon them.

Taking first place in Division C for in-depth reporting was editor Marcy Shortuse, with her series called “A Gilchrist timeline: How long will this go on?”

“This was an intensely researched piece that was laid out cleanly and easy to read,” the judge’s comments read. “For someone who knew nothing about the issue I was able to grasp it and feel it develop.”

Former Beacon writer Jack Short received a first place honor for his profile story called “A bottle of Scotch and a carton of Marlboros: Martin Walker.” Judges said, “The writer found an interesting story and told it well, rich in detail.”

Eco-columnist Delores Savas, who has been with the Boca Beacon for almost 30 years, took first place for her piece titled, “The osprey, a perfect dad.” Judges said the writing was lively and the art was nice.

The coveted “Oops of the Year Award” in all three categories of weekly newspapers was given to Shortuse for her feature pieces titled, “Talking dogs and cats with President G.W. Bush” and “Sometimes we wish we just hadn’t said anything at all.”

We won’t go into what the judges said. But we can still blame it on Bonnie McGee.

Receiving a third place award in the “Sports Page or Section” category was writer Susan Erwin with her page titled, “Fishin’ Fun.” Judges said they were sure the readers enjoyed the coverage of the event.