They call him ‘Dumplin’: Captain reminisces on the original Boca Grande

BY OLIVIA CAMERON – The Naples Sailing and Yacht Club visited the island to hear a special guest speaker, and they may have gotten more than they bargained for. “Captain Dumplin’ ” gave an inside look at being a Boca “Bad Boy” before the Causeway was in existence.
Whether on land or sea, everybody around here knows his name – just not his real name.
Captain William Wheeler III, better known as “Captain Dumplin’,” had a visit with the Naples Club members during a dinner at the Eagle Grille last Friday night. His tales had the dining room rolling.
When asked why he goes by such a nickname, he was puzzled. “I really don’t know,” said Dumplin’, “but if you really want to find me in Boca Grande, you ask for Dumplin’.”
When asked what he came to talk about, he flashed a smile and blurted out one word: “Women. They say I’m the expert on women,” as if he wouldn’t have to say any more than that. 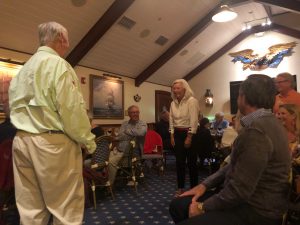 All jokes aside, for maybe a few seconds, Dumplin’ gave a synopsis of how his family came to be. “I am the history. During the Depression, my father was a teenager who jumped on a freight train and landed here … My mother’s family has always been here.”
As head of Wheeler Charter Fishing and a third-generation fisherman, he grew up in the tarpon business. His memory of the way the island used to be doesn’t fall victim to the test of time.
Dumplin’ offered his opinion of Boca Grande without holding back. “The Boca Grande before the Causeway was much better than the Boca Grande after the Causeway.” He reveled in the trouble he used to find his younger self in.
“I graduated fifth in my class, but there were about five of us,” Dumplin’ said, poking fun at himself. His storytelling let out secrets of his past and even some background knowledge that just shouldn’t be publicized.
When he had once asked how big the island was, someone close to him at the time lent an explanation he’ll never forget: “Boca Grande is so small we didn’t have a town drunk. We just all took turns.” Maybe that’s the reason we’re all so familiar.
This dinner and a show both entertained and informed the Club members. As fellow seafarers, they didn’t hold back questions. The exclusive event gave Dumplin’ the chance to share some classic narratives and provide plenty of ear candy.
When History Bytes first invited him to speak, his late wife, Dee Wheeler, gave him a bit of advice, and he ran with it. “They invited me to their library. I told them, ‘if you came here to hear me talk, you’re wasting your time, because my wife told me not to tell dirty jokes and not to tell the truth about families here.’ ” But even with her advice in the back of his head, Dumplin’ knew his partner would have been proud.
Chairman Mary Claire Moser of the Naples Sailing and Yacht Club has no naive ear for his summits. “He’s always got a story to tell,” she said. “These generations take root and make the community what it is. And he knows all the dirt!”
The Club consists of boaters who take a cruise once a month to locations including Key West, Fort Myers, Sarasota and more. “We’re cruisers,” said Mary. Her reasoning behind asking Dumplin’ to join their dinner wasn’t far from what all were thinking: “If he can entertain on a boat, then he can entertain at a dinner event.”
The Naples Sailing and Yacht Club relished Captain Dumplin’s homage to the past and are sure to indulge in his fond memories again.