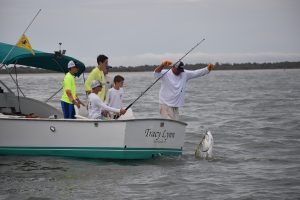 The anglers aboard the Tracy Lynn knew they were on a roll when they felt their fifth release of the 2017 Gasparilla Island Kids’ Classic tug on the line at 8:08 p.m.

No other team was coming close to their amount of fish caught and released, but they still were holding their breath until Tournament Judge Smitty Smith told anglers to reel in their lines at 8:30 p.m.

Clayton Werman, 11, Jacob Newcomb, 13, Lucas Newcomb, 11 and Keegan Black, 13, had all had a turn spanking a silver king before the tournament was over. All four have had previous experience in the Kids’ Classic, and their expertise was evident.

While the action on the water was pretty amazing, the primary reason for the tournament was not necessarily the fishing.

More than $37,000 was raised for local children’s charities through entry fees, including $2,000 to The Island School, $2,000 to the Englewood Community Care Clinic, $1,000 to Moffitt Cancer Center, $2,000 to Johns Hopkins All Children’s Hospital, $1,000 to Lemon Bay Conservancy, $2,000 to the Dee Wheeler Scholarship Fund through Friends of the Boca Grande Community Center, and a whopping $10,000 to Easter Seals.The biggest contribution was for $17,000 to Charlotte County School System STEM camp.

The weather was looking pretty rough as the day began for the 2017 Gasparilla Island Kids’ Classic on Saturday, June 10. The skies opened up around 10:30 a.m., and at 11 a.m., when the interactive art show was scheduled to begin, the island was experiencing a full-blown, long-term downpour.

This didn’t deter Capt. Sandy Melvin, organizer and founder of the event. “Come on down here and have some fun!” he told his Facebook followers in a video clip.

“The fish are already wet, and fishing will go on as scheduled!”

The kids were lucky, because after playing in the mud and rain for a few hours at the registration party they were able to get cleaned up and head out on the water. There they fished for almost the entire three hours of the tournament without weather being a factor.

The first “fish on” came just six minutes after the tournament began, when angler Chase Tudor on the Casuarina with Capt. Charlie Coleman hooked up. His release came 34 minutes later, and it was the first of the tournament. For his effort as “fisher boy” he received a rod and reel combo from Fishermen’s Edge on Placida Road.

After that the silver kings were consistently compliant. Each team of kids fought valiantly, some of them taking turns reeling in their giant catches. While Chase was the first male angler to bring a tarpon to the boat, Keagan Roeder was the first girl to release her catch at 6:19 p.m. She won a spa day for four at Courtyard Hair at the north end of Gasparilla Island.

In what might have been a record-breaking moment, a 5-year-old girl, Kristen Brady aboard the Henry & Waters team boat, released her first tarpon as well. She was quite possibly the youngest child to fish the tournament and record a release.

At 6:36 p.m. angler Rory Shortuse, 10, hooked her first ‘poon. Weighing in at only 48 pounds, she did her best, but about halfway through the fight she handed the rod over to teammate Ian Bell, 15. Ian brought the tarpon – estimated at about 150 pounds – to the boat on a rod that the great fish had snapped in half.

The action continued until 8:30 p.m., when the tournament ended.

By that time 28 releases had been recorded. When all was said and done, the team aboard the Tracy Lynn took first place with five releases. Anglers included Clayton Werman, 11, Jacob Newcomb, 13, Lucas Newcomb, 11, and Keegan Black, 13.

The third-place team with the last fish caught was aboard Searene, with Capt. Lamar Joiner Jr., representing Gasparilla Outfitters. Anglers included Matthew Waterhouse, 13, Jackson Ricciardi, 13, and Nico Santucci, 13. They had two releases throughout the tournament and hooked up with the winning last fish at 8:29 p.m., one minute before the tournament’s end. They released their fish at 8:31 p.m.

“We have fun with this event,” Melvin said. “The kids, captains, volunteers, sponsors and charitable partners are all so great and doing great things! And our world-class tarpon fishing, the charm of the community center and the support of the local residents and businesses couldn’t be better. We’re very proud of it all and everyone involved.”

The date for the 2018 tournament will be announced soon.