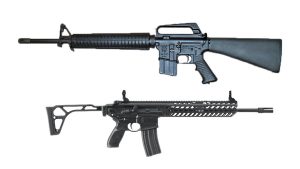 We were faced with another American disaster last weekend, a mass shooting that left 49 Americans dead and many more wounded.

For just a little while afterward, the American people did what they always do – they cried, they prayed, they came together. Many people who are inherently against certain lifestyle choices some of the shooting victims had made jumped to their defense, because they are Americans. In the days that followed, though, the dissension started … as it always does.

Some people who thought was a terrorist attack started to say it was a hate crime and nothing more. Others argued that it was both.

The facts stand as of this day that on June 12, one man walked into a nightclub called Pulse in Orlando with a rifle and a handgun and systematically killed as many people as he could. He had lots of time to do it, because there were no countermeasures taken by anyone inside the club, and it took hours to find a way to get him out while at the same time taking as few innocent lives as possible.

Now there are members of our federal government who have suggested that due process is “killing us” because no stricter gun laws have been put in place.

For those of us who believe 100 percent in the Second Amendment, this was not the best case scenario for them to base their argument on. The shooter at Pulse had been investigated by the FBI – twice – on the grounds that he was a potential terrorist. He had filled out his 32-page Class G Florida statewide firearms permit paperwork, and he completed even more paperwork and training to become a security guard who subcontracted for the U.S. government.

But he was still considered a potential threat by that same government at one time. Do you know why he was allowed to purchase firearms of any kind after those FBI investigations, and why he got a job as a security guard for a firm that often subcontracted for the government? Because he filled out all of the required paperwork. Because, for whatever reason, he had been cleared by the government.

He had essentially been deemed harmless.

That’s called due process. They had no evidence to back up their allegation that he was a terrorist, so they had to let the allegation drop. Now we are faced with the outcry that due process is hindering our way of life.

I am left watching people who have not educated themselves in any way about terrorist threats, firearms or any other part of this equation say that due process is a problem. I am left trying to explain to people that the SIG Sauer MCX rifle the shooter used is not an assault weapon, and a bunch of other things I’m not going to go into here. People need to educate themselves before they form a valid conclusion … about anything.

This stuff isn’t that mysterious. The mechanics of guns, the history of radical Islamic threats against the United States based upon the fact we allow people to live whatever lifestyle they choose … this isn’t rocket science. It’s just a little bit of research.

We are blessed to live in a country where our freedom is sacred, where we can seek out places to live where we are generally safe, and do not feel the need to own a firearm. Many take that for granted, especially where we live.

It’s easy to feel revulsion for guns when you don’t ever need them. On occasion, though, logic dictates the integration of the use of a weapon into an individual’s personal safety backup plan. It can be because of bears, because of coyotes in the livestock, or because of crime.

If you are lucky enough to live in a place where there are none of those threats, that’s great. Please just keep in mind that not everyone has that luxury.

Now we have generations who have never handled or fired a weapon and have never seen them used in daily life. They just know they’re afraid of them because they have not taken the time to educate themselves.

How many situations have people extricated themselves from without the use of a weapon? That’s impossible to figure. It happens, though, no question about it. Other times it leaves them without recourse, to simply give in and let their life be taken.

I do know there are situations that occur every day in which guns have saved lives. Brave men risked their lives at Pulse to save people. They used guns and armored vehicles.

The original settlers who came to America to get away from British tyranny experienced the biggest culture shock you could imagine. They had to relearn their way of life in a land where everything right down to the weather, the landscape and the animals was different. They started from scratch, and it was very hard. They thought it was worth it, though, to have freedom … to do what they wished, when they wished, and with whom they wished.

Since then we have become a placid, entitled population. We expect our safety to be ensured, and ensured with precision.

Even though we have the finest military in the world and a vast majority of civilian law enforcement officers who take their job to protect the people of their community very seriously, and with patience and respect, there are many who still don’t feel it’s enough.

Those same people often do not consider the fact that ensuring their own safety is sometimes their own task to take up. They group together the majority of the one million normal, decent law enforcement officers with the handful of power-hungry jackwagons the media decides to show everyone.

They group together the millions and millions of Americans who own guns with radical rightwing nut jobs who, once again, just happen to make it on the news.

They want to go as far as to change the constitutional rights of other Americans because of their ignorance of weapons, in the name of the few who kill innocent people, no matter what their reason for killing might be.

I am very lucky to have had a father who taught me to be a warrior. He taught me to check inside my shoes before I put them on, to check my exits, and to always be aware of my surroundings. He taught me that pain and discomfort are only a hindrance if you allow them to be. He taught me you can take pain and turn it into determination, and when you look back after the fact you realize just how much you are capable of. So many people have lost that attitude, and yet that’s what brought us to greatness as a country. Drive, guts, tenacity and freedom brought us greatness, but it surely seems to be fading.

Anyone who has had a run-in with the law knows that due process is their friend. We even have a presidential candidate who is still in the running, even though she is under investigation by the FBI for allegations of crimes against her country.

The term actually originated in a statutory rendition in 1354 of a chapter in the Magna Carta of 1215, which was essentially created because of problems between King John and his barons. But it didn’t work very well.

When it was brought to American soil it was called “the law of the land.” Sir Edward Coke, the esteemed English lawmaker who coined the phrase, defined it as “due process of the common law” and said, “By the indictment or presentment of good and lawful men … or by writ original of the Common Law.”

One of Coke’s greatest passions was to make sure that the people’s confidence in the law was protected. He knew the people would not abide by a government or set of laws that did not protect their lives and their liberties. British Parliament walked the fine line between keeping themselves all-powerful and allowing the people to believe they were at all in charge of their own destiny.

Our founding forefathers did the same when they wrote that every American was entitled to “life, liberty and the pursuit of happiness.” Those are the base rights that every human being should have in this country, and even when Coke said, “Even mature democracies must consciously adapt to shifts in underlying economic conditions,” he did not define that as suspension of due process of law under any circumstance.

Hillary will thank you for it.

Marcy Shortuse is the editor of the Boca Beacon

Newer PostObituary: Robert Lambrecht
Older PostHowl at the Moon Ladies Night Out is coming this weekend