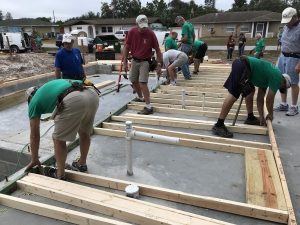 This home is the seventh that St. Andrew’s has supported with its time, talent and treasure as part of the 11-church Apostles Build program coordinated by Ms. Jan Nick at Charlotte County Habitat for Humanity in Punta Gorda.

This year St. Andrew’s contributed $4,200 of its Outreach budget to this housing project. St. Andrew’s annually contributes 10 percent of its revenue to a wide range of Outreach activities.

Outfitted with work gloves, safety goggles, hard-soled work shoes, optional personal hearing protection, safety hard hats, sun screen, goggles and sun glasses, the motivated carpentry team temporarily fitted and marked window and other exterior wall cut outs and cutoffs, and then cut, permanently placed and fastened by hand or power nailing plywood sheeting to the home’s 2 x 4 stud frames.   Those lacking skills with hammer and nails delivered plywood to other workers, cleared trash from the site, drew lines with the T-square to mark where nails needed to be pounded, discarded cut plywood scraps and distributed fresh water to parched workers throughout the morning.

The cool sunny weather fostered hard work, hustle and good fellowship. For many volunteers other than professional roofer Josh Smith and retired builder Mel Stephanowitz, Saturday was their first home-building experience beyond painting. Only one worker suffered a black fingernail, a favorable safety record for a novice carpentry team of young and old. Their reward? Hot Dunkin’ coffee and donuts, lunch delivered by St. Andrew’s volunteer Kim Lovo, a Habitat for Humanity tee shirt and the deep satisfaction of helping a single mom with a toddler son and a full time job achieve her dream of acquiring a new home, despite her limited income and physical limitations.

Habitat for Humanity and local Charlotte County family specialists thoroughly vet finalist applicants to validate financial qualifications, character and job stability. To qualify, a potential home recipient in Charlotte County must have earned in 2017 an annual income of not more than $32,700 for a family of four. That dollar cap equals 60 percent of the Charlotte County median income of $54,500.

While volunteers help build the home, the home recipient contributes 300 hours of “sweat equity.” Fortunately, this year’s home recipient enjoys working with tools. On days when she is unable to swing a hammer at the home site due to her physical limitations, she often brings a friend to the worksite to help with construction. From a financial perspective, the home owner grants a mortgage on the property to Habitat for Humanity and signs a promissory note in favor of Habitat for Humanity. This arrangement enables Habitat for Humanity to build more houses with funds raised from churches like St. Andrew’s and other sponsors.

The current average monthly payment for a 3-bedroom, 2-bath, one-car garage home built by Habitat for Humanity in Charlotte County is $450 per month, including insurance and taxes.

Combatting local homelessness among low income workers remains a priority for St. Andrew’s Outreach Committee chaired by John Rice of Boca Grande. According to Habitat for Humanity research, nowhere in the USA today will a full-time minimum wage job pay for a medium one-bedroom apartment; in 30 states even two minimum wage jobs won’t cover the rent.

Reliable housing can enhance job stability for the new home owner. After learning that this young mother would be Charlotte County’s Habitat 2018 Apostles Build homeowner, she secured a position-in-training to become a pharmacy technician with predictable work hours. She expressed her sincere appreciation for the new home saying, “I am beyond grateful for this opportunity. No amount of words can describe how I feel to be a part of such a wonderful event. From me and my son, I thank you all so much.” Her son’s father passed way in a motor vehicle accident approximately six months ago. The benefits of safe affordable housing extend beyond shelter. Secure housing can enhance a child’s educational achievement. A survey of 400 Habitat families in the Denver metropolitan area found that children raised in a Habitat for Humanity home are twice as likely to attend college compared to the local average for similar demographic and economic groups.

On Saturday, Jan. 13 the St. Andrew’s Outreach team completed a highly successful, safe work project by mid-day, enjoyed warm fellowship and most importantly realized the joy of contributing their time and talent to meet the housing needs of others in nearby Port Charlotte. St. Andrew’s invites parishioners and non-parishioners to participate in its many Outreach activities.

Please contact St. Andrew’s Volunteer Coordinator Pam Olivero at (941) 964-2257 to swing a hammer for Habitat for Humanity next year.