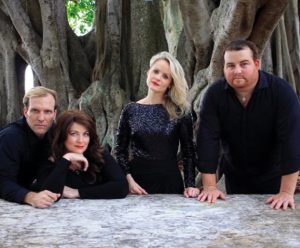 Accompanied by members of the Sarasota Orchestra, The Qol Quartet will be presenting “Händel’s Messiah – Christmas Portion” on Tuesday, Dec. 19 at 5 p.m. at St. Andrew’s Episcopal Church. This special concert is open to the public at no charge, although donations will be welcomed.

In 1742, when George Frideric Håndel’s Messiah premiered in Dublin,      audience members were advised to leave their hoop skirts and swords at home in order to make room for the anticipated crowds. Since then, the Messiah has become a yuletide tradition on orchestra calendars, owing to its uplifting message.

Here in Boca Grande the concert at St. Andrew’s on December 19 will      feature The Qol Quartet, whose performances have delighted audiences throughout Florida and the U.S. since its founding in 2014. Members include Johanna Fincher (soprano), Robyn Rocklein (mezzo-soprano), Adam Bielamowicz (tenor) and Christopher Holloway (baritone). Along with The Qol Quartet, musicians from the Sarasota Orchestra will be presenting this special performance.

Johanna Fincher has not only appeared as a soloist in many countries throughout the world, but has performed with Opera Tampa, Sarasota Opera, St. Petersburg Opera, the Venice Symphony, Charlotte Symphony Orchestra, Sarasota Pops, North Port Orchestra, Gloria Musicae and for the National Trust for Scotland. On the concert stage, she has sung the Faure Requiem, Vivaldi’s Gloria, Bach’s Cantata 68 and Haydn’s Creation, among others, and has had many roles, including Annina (La Traviata), Bastienne (Bastien und Bastienne), and Celie (Signor Deluso).

Robyn Rocklein has appeared in England, Austria, Germany and throughout the U.S. Her roles include Federico Garcia Lorca (Ainadamar), Carmen (Carmen), Elizabeth (The Crucible) and others. She has sung in concert Verdi’s Requiem, Mozart’s Mass in C Minor, and Rossini’s Stabat Mater. She has performed with the Arizona Opera, St. Petersburg Opera, Tucson Symphony Orchestra, John William’s Star Wars in Concert, and in Lord of the Rings Symphony as the mezzo-soprano soloist at the Tuscon Convention Center Music Hall. She holds a D.M.A. in vocal performance from Arizona State University.

Adam Bielamowicz has appeared throughout the U.S. in roles such as the Steersman (The Flying Dutchman), Calaf (Turandot), Fenton (Falstaff), Rodolfo (La Boheme) and Borsa (Rigoletto). In concert, he has sung the Mendelssohn’s Elijah, Händel’s Messiah, Mozart’s C Minor Mass and others. He has performed with companies such as the Houston Grand Opera, Sarasota Opera, the Lubbock Symphony, and most recently made his Carnegie Hall debut with the American Symphony Orchestra.

Christopher Holloway is an energetic, vibrant performer who “… acts with waltz-like precision … and is able to sing and act with equal agility.” He has taken the operatic stage with companies including the Houston Grand Opera, Opera Tampa, Opera Naples, St. Petersburg Opera, Orlando Opera and others. His repertoire includes over fifty roles in opera and in musical theatre, and he is a member of the National Association of Teachers of Singing. He teaches in a wide variety of styles and is owner of the Tampa Bay Voice Studio. He holds advanced degrees from Rice University and Florida Southern College.

Newer PostCome see Carroll, sip some sangria and make a scarf, then stop by the annual Christmas party
Older PostLiterature Forum to hold second presentation of the year by going ‘Old School’ with Tobias Wolff