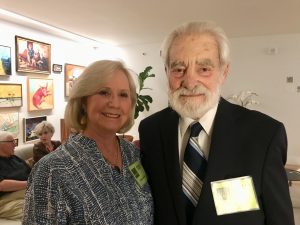 BY MARY BESS – At 90 years of age, island resident Tim Seibert was an engaging speaker at last weekend’s MOD Weekend in Sarasota, where he was the guest of honor. Full of fun and good stories, and generous in his appraisal of the good work of his colleagues, he was characteristically unassuming and occasionally telegraphed a look that asked, “Can we go now?”

Asked what he would design if he built a house for his wife Lynne and himself today, he says, “It wouldn’t be modernist. Being a purist is ridiculous unless you’re a Paul Rudolph or a Frank Lloyd Wright.”

You need to be yourself and do what you can do best, he stresses. Whether he was designing Gulfstream Towers, one of the first condominium developments in downtown Sarasota, the graceful Bay Plaza modernist masterpiece with its undulating curves, a project for Arvida Corporation on Longboat Key, a beachfront showplace or a modest house for clients interested in good architecture, the process was a collaboration designed to meet the needs and desires of clients and Seibert’s ability to translate them in ways they often could not have imagined.

“His style is marked by buildings and building elements which appear to ‘float’ virtually unsupported, and by ‘decoration’ in the form of precise, deep shadows, purposefully created by walls and other components,” according to Michael Epstein, design principal at Seibert Architects. Seibert’s legacy, says Sam Holliday, former colleague and now owner of Seibert Architects, is “his elegance, his image as an architect, and, most of all, how rare it is to have the natural talent that he has.”

Seibert’s landmark projects throughout Sarasota show his amazing versatility, which made Seibert Architects one of the most successful firms in the region. At one point nearly ninety percent of Longboat Key was on the drawing boards of Seibert Architects.

After studying art at Stanford University, Seibert enrolled at the University of Florida to earn his bachelor’s degree in architecture. During a hiatus, he decided to build his own house on Siesta Key.

“I was out of school for the summer, and I knew how things should be done. I built on the grand canal on a lot that cost $1,500. It was a series of pavilions. It’s nice to know how to do these things.”

In the early 50s Sarasota was a small town of artists and eccentrics that attracted celebrities like Bette Davis and Ernest Hemingway. Why did Sarasota’s flowering fade so soon? Was it the disappearance of optimism following the war? The grossness of the national product and the vulgar prosperity it created? Rudolph and Lundy moved on to larger ponds as Sarasota became less stimulating.

“I believe the real end was caused by the flood of people who came to Sarasota from other places,” said Seibert. They “made Sarasota just like anywhere else” as the population jumped from 20,000 in 1945 to about 350,000 today. The “brutal” filling in of the Bayfront and pumping up Bird Key were turning points.

The founding of New College was a vain attempt to recapture the “elegance and intellectuality” of Sarasota. I.M. Pei was chosen as designer from an international field of celebrity architects. He eventually gave up the bureaucrats and “local toadies” making design decisions at New College, convinced they could not appreciate good architecture.

“The spirit of Sarasota was broken, gone, “says Seibert.”

Sarasota was on its way to becoming part of the mega-city stretching from Tampa to Naples.

After architecture school, Seibert worked for Paul Rudolph as a draftsman, then tripled his salary by joining the firm of Philip Hiss, a civic-minded intellectual who purchased land from John Ringling to develop Lido Shores on St. Armand’s Key.

At age 28, Seibert designed the Hiss Studio, an icon of midcentury modern architecture. Seibert long scoffed at the idea of a Sarasota School of Architecture. Yet an architecture was evolving which combined the vernacular features of subtropical structures before air conditioning and the availability of new materials imaginatively employed. The Sarasota brand was characterized by a light and elegant architecture, still much admired.