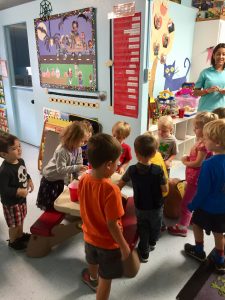 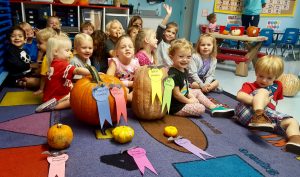 This past week at the Boca Grande Child Care Center there was much pumpkin fun to be had, including measuring and weighing many pumpkins students brought in. Before they weighed and measured the pumpkins the children had a chance to make some predictions and estimations. Teacher Ms. Breon put a fun spin on things this year by allowing the children to “vote” for each category by placing their ticket in the cup corresponding to the pumpkin of his/her choice. Categories included biggest pumpkin, smallest pumpkin, tallest pumpkin, heaviest pumpkin, silliest pumpkin, yuckiest Pumpkin (the candidates were a bit rotten!) and best pumpkin.

After the voting the scientific categories of biggest, smallest, tallest and heaviest were measured and weighed to verify the results. The little scientists were pretty accurate with their predictions, as they were correct in three out of four categories! Tallest was a little confusing due to the second tallest having a long stem. But these things happen.

The kids will have a Halloween party on Monday complete with costumes, games and more. Photos submitted by BGCCC staff