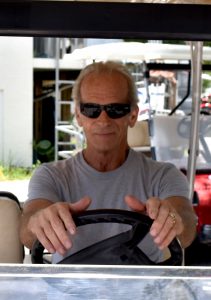 Jim Scholtz is the co-owner of Kappy Kart golf rentals and sales at the north end of the island, but he’s had several other interesting career paths before venturing into a business partnership in Boca Grande.

Born and raised in a little town called Oak Creek, Wisconsin, Jim was drafted the day after he graduated from high school. Not really wanting to serve in the Army, he requested permission to enlist in the Coast Guard.

“After I received my notice in the mail, I went down to the induction center and explained what I wanted, and they made it happen,” Jim said.

He served for four years, starting out in Okinawa and traveling around the islands of Japan. He started out working as a machinery technician.

From there he returned to the states and went to college in Yorktown, Virginia. He still had two years to serve at the time. He was on isolated duty, which meant he could choose the destination where he would complete his term.

“I wanted to go to school, so I choose Yorktown to attend machinery technician school,” Jim said. “I already knew much of what was in the classes, but this certified me to work in the field.”

After he finished school, Jim was reassigned to Ocean City, Maryland to serve in the Coast Guard search-and-rescue unit.

His job there was to rebuild and repair engines on all kinds of machinery at the station. It also encompassed doing work on the search-and-rescue boats.

“We’d take care of the engines and electrical systems on the boats – anything that needed to be repaired.”

From there, Jim took a coxswain course and earned his license as a search-and-rescue pilot. He also became a certified rescue diver.

“And I was a boarding officer … I held many positions while I served.”

Jim married his high school sweetheart, Janice, when he was home in Wisconsin on leave.

When he finished his service, Jim and Janice returned to their hometown in Oak Creek. He worked in the steel industry for about two years but decided he wanted to pursue a new career path, so he joined the police force. He went to inquire with the Sheriff’s Department in Milwaukee County, and he was hired immediately and sent to the police academy for training.

He served in law enforcement for nearly 24 years.

Jim and Janice used to come down to Southwest Florida to vacation annually. “Because of my job, I would get almost four weeks off each year,” Jim said. “So I would take all that time at once, and we’d come down here and stay in Venice.”

Jim started diving for shark’s teeth off the beaches in Venice, and he quickly grew fond of the area.

In 2003 they came down for vacation with the intention of looking at property, and they ended up finding a home they liked in Englewood.

After relocating and getting settled, Jim saw an advertisement in the newspaper for a position at a marina in Boca Grande. He was offered the job, and once the owners realized the vast mechanical experience Jim held, it soon turned into a full-time position. He worked on all of the equipment at the marina, including boats and golf carts.

“I had to learn about golf carts really quick,” he said. “So that’s what I’ve been doing on the island for the past 15 years.”

Three years ago, Jim heard through the island grapevine that Steve Kaplan at Kappy’s Market was looking for someone to help repair golf carts.

Steve only had six or eight of them at the time. So Jim stopped in to speak with Steve, and the more they talked, the more they realized that there was a need for more carts.

“I could see the demand working here, and I could see the potential, and nobody else I’d talked to about it could understand that, but Steve did,” Jim said.

So they formed a partnership, and three years later, they have 45 rental carts and 10 custom carts for sale.

Business has been booming, but it’s been slower during the summer months.

Jim said the amount of customers nearly triples during season, which can get a bit challenging.

The owners have a shop off-island in Grove City, where they haul the carts for service and repairs and bring them back to the island.

Kappy Karts offers golf cart service and repairs all over the island.

The business continues to grow, with numbers almost doubling every year.

It started out with just Steve and Jim, and now they have four employees, including one mechanic/technician and two people who maintain the carts and do light service on them.

Even though they have 45 carts, they still have to turn people away during the busy season.

Although they plan to grow the business, they also have come to the realization that they’ll have to stop at some point, because half of the year, many of the carts are just sitting there and not producing any money. So the owners think they will cap it at about 60 carts.

They build some of the carts, and others are ordered or purchased on sale.

“I also like picking up some that are unique, if we can afford them,” Jim said. “Steve is very energetic and a real ‘go-getter’ when it comes to this business.”

Jim is on the island at least once a day, seven days a week to ensure the business is operating smoothly, pick up carts to haul off island to repair, and bring back others.

A natural mechanic, Jim worked on cars as a hobby while he was in law enforcement. He’s always enjoyed taking things apart and putting them back together again. He would strip the cars down to nothing, and it would take him about two years to rebuild them.

“It kept me busy and took my mind off of work,” he said. “And I really enjoyed it. Building things is my favorite hobby.”

He also used to build cars and take them to automotive shows. Hence, the transition between fixing cars and golf carts was a pretty simple one for Jim.

“They are just like little cars, just not as technical,” he said.

Jim’s cell phone number is the business number for the off-island shop, so he is also the secretary for the business, the landscaper and cleaning crew for the shop.

Jim and Janice have two children: Paula and James. And from those two, they have 15 grandchildren.

James and his family live in Englewood (Florida), and Paula lives up north in Wisconsin with her family.

The grandkids come down and visit from time to time, and Jim and Janice recently went back up to Wisconsin to attend the graduation ceremony for one of the grandkids.

“That was a nice visit, but I don’t miss the cold winters,” he admitted.