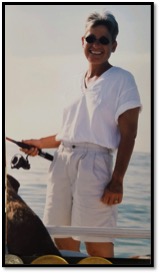 BY ANNE LAMORIELLO – There was no cry for help, just a big splash. Without even thinking and before I could run for help, Lori had pushed away from the dock in our 12-foot dingy in the direction of the splashing and thrashing.

The thrashing was coming from the other side of a 32-foot yacht about 60 yards away smack in the middle of the swiftly moving current of the Parker River in Newbury, Massachusetts. Something or someone was in trouble.

I ran for help. By the time others swung into action on the dock, Lori was already rowing back to the end of the dock, soaking wet, with a young man in his late 20s also soaking wet, hanging half in and half out of the dingy. Gasping and coughing, he repeatedly thanked Lori for saving his life. Others helped to pull the big guy out of the dingy and couldn’t believe Lori had lifted him out of the water by herself and into the dingy. The young man was about 6 feet tall and weighed about 200 pounds, and had apparently slipped trying to exit his boat.

The local newspaper got wind of it and wrote up a nice story, noting her bravery and courage. She was appreciative of the article but modest of her action. That was Lori, so unassuming.

On Monday, March 4, 2019 Lori Charette, a resident of Little Gasparilla Island, passed away from complications due to pneumonia after a brief hospital stay. She was 56. For all her young years, Lori lived a full, useful and compassionate life dedicated to animals, the preservation of the environment and wildlife as well as lending a helping hand to those in need.

Lori was brought up in Ipswich, Massachusetts on the Ipswich River, a place that became her play yard, having her first boat as early as the age of seven. When I met up with Lori in the late 1980s, I didn’t know much about boats, nor did I have any interest up until then. Her passion for the sea, the environment and her willingness to teach this plebe soon became my passion. While she moved to New Mexico for a short while, she could not wait to get back to LGI.

And she did return in 2015 with her wife, Melissa Loudat, and together they became the fabric of LGI as wildlife rescuers and tireless curators of the island’s habitat – rescuing a raccoon from the top of a piling near Gasparilla Marina, disloding fishing line from the bill of a pelican or keeping a manatee shaded in red tide waist high water for some three hours as they awaited transport to Sea World, to name a few.

Life with Lori was always an adventure, especially when we took to the ocean. She was a woman of many talents, some of which included lobster woman, boat captain, boat builder, boat mechanic, fisherwomen, cowgirl, dog trainer and dog groomer.

If you were lucky enough to know her, you were lucky enough. Slowly you too came to love the things she loved, because you loved her. Lori touched the lives of so many. We will miss this beautiful, caring soul. I will miss my best friend. Her heart was as big as her smile. No doubt she has a special place in heaven.