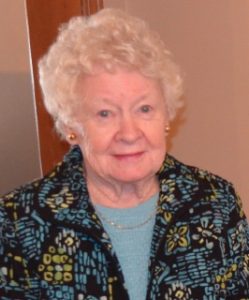 Frances Dale Melvold of Maquoketa, Iowa, who spent winters with her husband and family members at Boca Grande for more than 40 years, died November 27, 2017 at Clover Ridge Place Assisted Living in Maquoketa. She was 93.

After visits to the island in the early 1970s, she and her husband, Robert, were among the first to purchase a condominium at the Boca Grande Beach Club following its development in 1973. Her mother, Marian Elwood of Cresco, Iowa, purchased a separate unit at the Beach Club, where they spent winters until her mother’s passing in 2001.

Frances and her husband then wintered in Placida and continued to visit the island. After her husband’s passing in 2005, she returned to Gasparilla Island, spending winters at Sea Oats, where her brother and sister-in-law, Henry and Carol Elwood, own a condominium.

Frances and her husband, both natives of Cresco, Iowa, were married in 1944 at the U.S. Naval base in New Orleans, La. while he was serving as a naval officer. After the war, they realized their dream of owning and operating community newspapers and a printing business in eastern Iowa and northwest Illinois. They purchased the Englewood Print Center and operated it for several years in the 1980s.

She and her husband attended Boca Grande Lighthouse Methodist Church and participated in many activities on the island.

She had a special interest in serving people with disabilities and was instrumental in the founding of Area Residential Care in Dubuque, Iowa, and the Jackson County Developmental Activity Center in Maquoketa. She joined civil rights marches in the 1960s and promoted social and environmental causes the rest of her life.

Survivors include three sons, three daughters, eight grandchildren, four great-grandchildren, her brother and sister-in-law, Henry and Carol Elwood, and many nieces and nephews.

She was preceded in death by her husband of 61 years, Robert Melvold; one sister and one brother.

A memorial service was held at the Maquoketa United Church of Christ in January. She donated her body to science.

Memorials may be given to the Lighthouse Methodist Church. Condolences may be sent to Douglas Melvold, 510 N. Arcade Street, Maquoketa, Iowa 52060.