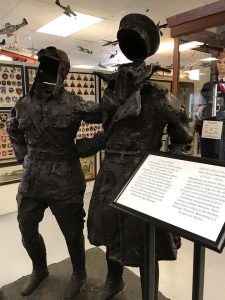 BY MARCY SHORTUSE –
When you walk through the World War I portion of the Military Heritage Museum, a haunting site will catch your eye immediately. A cast sculpture called “The Buddies” by John Nelson Battenberg depicts two paratroopers, very similar to those who dotted the skies over Normandy on D-Day. Upon closer inspection you see that the roughly hewn uniforms are faceless and hollow.

Museum Executive Director Gary Butler had a simple explanation: The soldiers who filled those uniforms usually didn’t wear them for long.

“They had such a high death rate, that’s why they’re hollow.” he said.

More than 22,000 military veterans live in Charlotte County, including some who are the oldest in the country.

There’s a lot to be learned at this museum, which has moved from its original location in Fishermen’s Village right next door to the old IMPAC University building. The first floor is dedicated primarily to artifacts from the Revolutionary War to the Gulf Wars, as well as a movie theater that seats 245 people. The second floor focuses on more interactive features, including a military library, several hands-on exhibits and virtual reality opportunities to drive a tank, shoot war weapons from different time periods and to jump out of a plane.

“We integrate the whole museum into that theme on special days, like the anniversary of the Treaty of Versailles,” Butler said.

On June 28 the museum will be featuring a special exhibit commemorating the 100th anniversary of the Treaty of Versailles. The whole theme of the museum will focus on World War I. A special film will be shown in two showings in the theater, and the virtual reality programs will feature World War I experiences.

The Treaty of Versailles was the most important of the peace treaties that brought World War I to an end. In the end, around 4,000,000 American soldiers were mobilized, and 116,708 American military personnel died during World War I.

in the Museum Gulf Theater, directed by Academy Award winner Peter Jackson. It features never-before-seen footage of soldiers as they faced the fear and uncertainty of frontline battle in Belgium at the end of the Great War, as it was then known.

A documentary called “NOVA: First Air War’ will be shown at 10 a.m. When World War I began in 1914, the air forces of the opposing nations consisted of handfuls of rickety biplanes from which pilots occasionally took pot shots at one another with rifles. By the war’s end, the essential blueprint of the modern fighter aircraft had emerged: It was now an efficient killing machine that limited the average life expectancy of a frontline pilot to just a few weeks.

Featured exhibits in the museum that day will include a life-sized World War I trench, a video on trench warfare and virtual reality exhibits featuring the time period. The Academy Library will feature some of their rare World War I books, photos and publications.

A remembrance ceremony will be held in the theater at 11:45 a.m., but attendance requires a full-access pass.

The museum is family-friendly and features exhibits and virtual reality interactions that will be interesting to children. Parking is available in a garage under the building, as well as in the Fishermen’s Village parking lot. Golf cart shuttle service is available to and from the parking areas.