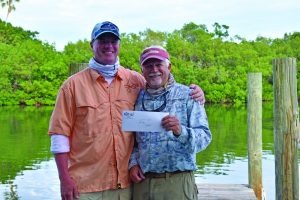 BY MARCY SHORTUSE – It was another winning year for Capt. Sandy Melvin and his angler, Patrick Waterhouse, on Tuesday, Nov. 21 as the 24th Annual Gasparilla Island Fly Fishing Tournament was held. They took the top spot with a 19-inch trout.

Second place went to Richie Meehan with Capt. Jamie Allen, and third place went to angler Tom McKenzie and Capt. Doug Stewart, who had “most species caught on fly.”

“We raised $1,500 to support our Pass camera project,” tournament founder Melvin said. “You can watch from website go2boca.com right now, and it will soon be available on the Gasparilla Outfitters site (4tarpon.com), the Gasparilla Island State Park website and the Boca Grande Chamber of Commerce site. 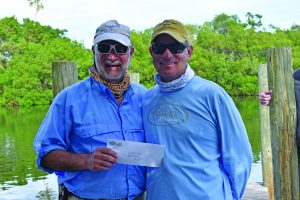 The web cameras will replace the sunset cam and the Pass cam that were on the Boca Grande Chamber of Commerce website. Technical issues took them down, and Melvin took over the task of replacing the cameras and the server.

“We had a great event, a great time, and many thanks to PJ’s Seagrille for hosting the cocktail party. Thanks to local businesses and captains, we also had some nice raffle prizes. We hope to see everyone next year for our 25th anniversary of this tournament.” 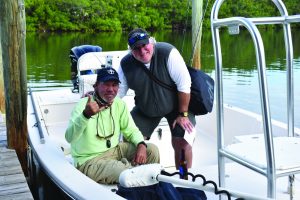