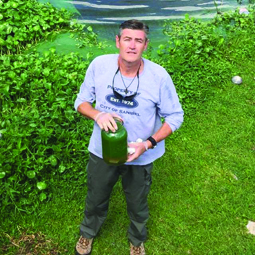 In her official statements and campaign literature, Senator Benacquisto claims she supports stopping Lake Okeechobee releases and is in favor of sending lake water south. The only way these goals can be achieved is by having the State of Florida exercise its option to purchase land currently owned by U.S. Sugar so that a reservoir and flow paths can be created to collect, clean and redirect that water south into the Everglades.

If Senator Benacquisto is truly serious about protecting our water quality and 57,000 leisure & hospitality jobs, she will sign the Now or Neverglades Declaration and she will sign it now.

The Now or Neverglades Declaration expresses support for the 200-plus Everglades scientists who believe that sending Lake Okeechobee water south is essential to stopping the damaging discharges to coastal estuaries that have resulted in the blue-green algae blooms, beach closures and states of emergency that have been declared in Lee, Martin, St. Lucie and Palm Beach counties.

Using Amendment 1 and other funds, we must identify and secure land south of the lake without delay, before development in the Everglades Agricultural Area (EAA) or other uncertainties condemn our waters to irrevocable destruction.

According to estimates, “… approximately 15 percent of the land in the EAA would be needed for the reservoir and flow paths. This would neither eliminate nor harm sugar cane and farming operations in Glades communities,” the Now or Neverglades Declaration maintains. In fact, this amount of land is less than half the acreage that U.S. Sugar has offered to sell to the State of Florida in an agreement that remains in effect until October 11, 2020.

And this is why the election between myself and Senator Benacquisto is so important. We cannot afford to take a chance on someone whose loyalties have been compromised.

Look, the science is settled. The money is available – thanks to 75 percent of Florida voters who cast their ballots in 2014 for Amendment 1. District 27 voters need to elect someone who will work tirelessly to identify and secure the land needed for that reservoir and flow paths. I am that person. I understand that it’s now or never, and that’s why I’ve signed the Now or Neverglades Declaration. Senator Benacquisto, why haven’t you?

For the full text of the Now or Neverglades Declaration, please visit: http://gladesdeclaration.org/.