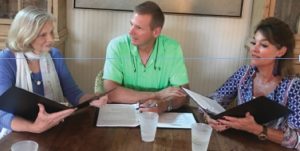 The Literature Forum’s January meeting will feature a reading by the Royal Palm Players of “The Trip to Bountiful.”
The play, by Horton Foote, was originally produced on NBC television in 1953 before moving to Broadway later that year. It gained major fame as a motion picture in 1985, starring Geraldine Page, who won an Oscar for best actress for her portrayal of Mrs. Watts, an older woman desperate to return to her home in Bountiful, Texas.
The RPP presentation, cast and directed by Dan Headington, features Alice Gorman in the role of Mrs. Watts, Mark Masselink as her son Ludie, Maggie Bush as her daughter-in-law Jessie Mae, Kerrill Taylor as a young confidante of Mrs. Watts, Lindy Hustedt in two roles as bus ticket agent and Fred Allardyce as the sympathetic sheriff who enables Mrs. Watts to achieve her dream of going home one last time.
The play was originally scheduled to be performed one time in the Boca Grande Community Center auditorium at 5 p.m. on Thursday, Jan. 11, but a second performance has been scheduled for the following day, January 12, also at 5 p.m., owing to the  great demand for tickets.
Admission is free, but a ticket from Royal Palm Players (964-2670) is required.