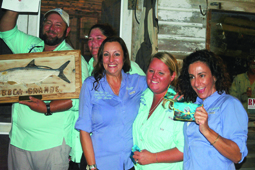 Was it the red shoes that did it?

We may never know, but the team aboard the Jill Marie stepped onto the Whidden’s Marina dock as winners of the 2016 Ladies Night Out Howl at the Moon Tarpon Tournament on Saturday, June 11.

The team included anglers Julianne Greenberg, Jill Chatham, Melissa Joiner Steyer and Candy Brooks. They released three tarpon that night to sew up the victory. Steyer, Brooks and Chatham each got one of the winning fish.

“It is an honor to compete in a tournament with such amazing lady anglers, and as always the night offered a lot of fun with healthy doses of competitiveness from all teams,” Brooks said.

“Thank you to all the captains, and a very special thank you to Capt. Dave Chatham on the Jill Marie for our second consecutive win!” So what was with the red shoes that everyone was talking about? Throughout the tournament on Facebook the shoes were making their presence known on Brooks’ feet … and they were shoes that were not normal attire for fishing. In fact, they were shoes actually owned by Steyer’s 7-year-old daughter, Isabella. Size 3 shoes, to be exact, and they helped Brooks get the third and winning fish.

“I’ll be sure to wear Isabella’s ruby red slippers again next year,” she said. “I’m sure they were our good luck charm?” Brooks may use some of her cash winnings to buy Isabella a new pair of shoes.

The team won a check for $4,590, as well as pearl necklaces from Julie Salvetti. Capt. Dave took home a tarpon carved by local artist Greg Albritton. Coming in second with three releases was the team aboard the Tracy Lynn with Capt. Willie Mills. His anglers – Nancy Denton, Amber McGuinness, Monica Clay and Tracy Mills – received a check for $3,060 and pearnecklaces from Julie Salvetti. Capt. Willie got his very own 30-oz. Yeti cup. In third place was the Squaw/Spook combo with Capt. Nat Italiano. Anglers included Kelly Locke, Wesley Locke, Loni Knehr and Charmon Shuford. They won $1,700 and pearl earrings from Julie Salvetti. Capt. Nat got a 30-oz. Yeti as well. In all there were 21 releases with an average release time of 3.5 minutes.