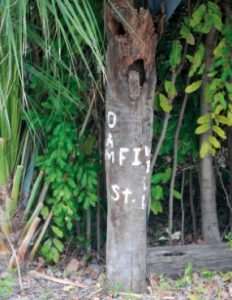 The Gasparilla Island Conservation and Improvement Association (GICIA) announced on Wednesday that they have filed a lawsuit against Lee County as a  result of actions taken by the Lee County Board of County Commissioners at a zoning hearing on Wednesday, May 8. These actions relate to properties located at 161,143, and 151 Damfiwill Street on Gasparilla Island, part of a proposal called “The Damfiwill Project.” The addresses listed are three of the five properties for sale in that project.

“The recent action by the Lee County Board of County Commissioners constitutes a violation of the Gasparilla Island Conservation District Act of 1980,” said GICIA Executive Director Misty Nichols. “This unique state law has been instrumental in protecting Gasparilla Island’s small-town charm for almost 30 years. The GICIA believes the May 8 action could have serious repercussions to the Act so, on behalf of our membership which constitutes approximately 800 Boca Grande households, the GICIA Board of Directors has unanimously agreed to take the legal action necessary to defend the Act.”

Nichols explained that in 1971, concerned leaders of the Boca Grande community recognized that increasing population and external forces would challenge the tranquility and quality of the island. With that foresight, they established the GICIA for the purpose of being a significant influence for conservation, orderly development and preservation of the very qualities which have attracted those of us who are here today.

“In the late ‘70s, the GICIA introduced the idea of the Gasparilla Island Conservation District Act and then worked diligently to see that the Florida Legislature enacted it in 1980,” Nichols said. “This landmark law has protected Gasparilla Island from the high-rise, high-density development that has so negatively impacted other coastal communities. Since its passage, the GICIA has been the guardian of the Act and has focused its attention on ensuring its careful implementation.”

The GICIA is a charitable membership organization that is dedicated to preserving the integrity of the Gasparilla Island Conservation District Act, enhancing conservancy properties, maintaining the Bike Path and encouraging initiatives that benefit our community.

If you would like more information, call their office at (941) 964-2667 or stop by their office located at the Community Center in room #8. To learn more about the Damfiwill Project, go to Damfiwill.com.

Because this paperwork was filed late Wednesday, we were unable to retrieve a copy of the complaint as of press time. Read the Beacon for more on this story next week.