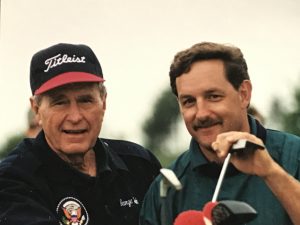 ■ BY SUE ERWIN – Golf Pro Ken Raynor has had a long established personal friendship with former President George H. W. Bush, prior to when he assumed presidency of the United States in 1981.

The Coral Creek Club PGA Head Golf Professional met Bush at Cape Arundel Golf Club in Kennebunkport, Maine 38 years ago when Bush befriended him during an annual summer sabbatical. Raynor also serves as Golf Pro at that club during the summer months.

Over the years, their personal relationship evolved to sharing family fishing trips to various destinations and of course countless golf outings.

“41 was the kind of guy who made you feel at ease,” Raynor said. “He’s very much a people person. He has a very kind soul. He’s become like a second dad to me and my wife, Anne.”

Raynor and his wife have shared many meals with George and Barbara, and they’ve had the pleasure of staying in the Lincoln bedroom at the White House on several occasions during his presidency.

“To this day we remain very close friends,” Raynor said. “Every year, we invite them to our home in Maine for an annual dinner before the holidays. It’s become a tradition.”

Raynor said he felt like writing the book was second nature to him because of the nearly 40 years the families have known each other.

After years of hearing friends suggest that he write a book, he teamed up with co-author and morning radio show DJ Michael Patrick Shiels and wrote “I Call Him ‘Mr. President’ – Stories of Golf, Fishing, and Life with My Friend George H.W. Bush.”

“I think it’s a wonderful tribute to the value of our friendship, and I think it will help people see the former president from a personal side instead of the political aspect that the public already understands,” Raynor said.

Barbara Bush stated in her forward in the book, readers will learn more about the human side of George, a side that no book has ever covered.

“Not many people know him as the practical joker that he is, and this book shares a few behind the scenes stories that hopefully will make readers smile and laugh, but also become compassionate about other people,” Raynor said.

Raynor said he and George share many common interests.

“Phil O’Bannon used to take to take the entire Bush family fishing, and I’ve fished numerous times with them. Barbara once said how thankful she was that George could come to the Coral Creek course and let the weight of the world melt off his shoulders, if only for an hour or two.”

After the presidency, the men played more and more golf because obviously Bush had more free time.

The men each contributed a few paragraphs about how gracious, thoughtful and caring the Bushes were during the times they shared with them. The excerpts are printed throughout the book in outlined boxes for added flavor.

Raynor has been coming to Boca Grande with his wife Anne and their son, Kyle, since the 1980s.

Due to his long-standing relationships in the Boca Grande area, Raynor was involved with the planning and construction process of the Coral Creek Club in 1999.

He was asked to serve as Head Golf Pro at the world-class golf course in 2000.

“I Call Him ‘Mr. President’ – Stories of Golf, Fishing, and Life with My Friend George H.W. Bush” was published by Skyhorse Publishing in September of 2017.

Proceeds from the sale of the book will be donated to the Kennebunkport Conservation Trust, and Portland Mercy Hospital’s “Gary’s House” via the Gary Pike H.W. Bush Cape Arundel Golf Classic.

“I realized it was an opportunity for me to give back and be a point of light to raise money for these two charities that are both very special to the Bush family,” Raynor said.

The book is currently available for purchase at the Coral Creek Club, and will soon become available at various businesses on the island. It can also be purchased at Amazon.com.

A book-signing presentation is currently in the works. It’s planned to be held at the Coral Creek Club in Placida. The date has yet to be determined.

Keep reading the Boca Beacon for details about the event.