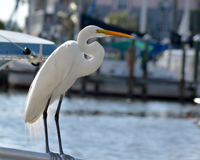 Life along the beach in Southwest Florida has been difficult in 2018, with persistent red tide brought on shore by westerly winds. The resultant mortality of fish and invertebrates plus airborne toxins very irritating to the eyes and lungs have chased away not only tourists, but also our beautiful shorebirds.

Some recent good news in early December is that things are gradually returning to normal. Whereas large flocks of resting shorebirds have been rare to nonexistent previously, we are now seeing sizable flocks at Englewood Beach and on northern Knight Island. These include a good mixture of gulls and terns. For example, a large (royal) and a middle-sized (Foster’s) tern are back in numbers and feeding along the beach. They feed mainly by flying over the Gulf waters and plunging down to catch small fish.

In addition to the fish-eating birds that feed in the Gulf, we are seeing long-legged waders such as the reddish egret that feed in shallow water. Small shorebirds such as dunlins that feed in even shallower water are present. They have a down-turned beak and probe in mud/sand for tiny organisms to eat. Presumably they would not be present if their food were not available. Sanderlings that rapidly run and feed in the beach surf zone are also present, but perhaps not in previous numbers; their major food is small crustaceans.

The presence of large numbers of semipalmated and Wilson’s plovers on northern Knight Island is also a good sign that their food is present. These plovers feed on invertebrates in the upper surf zone and the middle and upper beach.

A top predator of shorebirds has also been present. We observed a rarely seen peregrine falcon at Stump Pass and watched it chase but not catch a small sandpiper.

So, although I do not have direct evidence of the health of populations of small fish and invertebrates along our beaches, the indirect evidence of presence of considerable numbers of shorebirds that make up the normal food web in this area supports the conclusion that some normalcy has returned to our beaches.