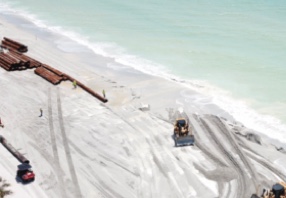 Beach renourishment is almost complete in the Histric District area, with only a few odds and ends to tie up for a few days. Work on the south end is scheduled to begin this weekend.

Our source at the U.S. Army Corps of Engineers in Jacksonville, Public Affairs Specialist Jim Yocum, explained it more thoroughly.

“We anticipate that the beach fill on the northern part of the project will be finished by the end of this week,” he said on Wednesday, “though the contractor will still be doing some tilling starting next week and lasting for a few days. We expect the beach fill in the south to start this weekend.”

Yocum said that even though they expect the fill to be done in the north zone this week, the contractor will start taking apart the pipeline in that area, and beachgoers should be aware that there will be equipment and pipe moving around during that demobilization.

In answer to a question many have had about why the pipe was spewing pink water earlier this week, Yocum said, “The nontoxic dye is used at start-up to make sure there are no leaks in the pipeline. The contractor used it again this past weekend as a precaution when they were alerted to a pressure change in the pipe. They only flush water through the pipe when the dye is used, not sand. When they do that, it should only last for a few minutes.”

Yocum also readdressed the concern many have regarding sea turtle nesting season going on right now. The project is running 24 hours a day, with bright lights set up on the beach, but he assured us that the project is being watched closely from an ecological standpoint.

“We have a state-licensed and approved turtle monitor who is relocating any turtle nests within the construction footprint, and that person clears the work area each morning before the contractor starts working. We don’t foresee major impacts on wildlife due to construction,” he said. “As for the potential problem of turtles being sucked into the pipe, the engineering team assures me that they are using a cutter dredge that does not harm the turtles in the water. There is no suction on the cutter dredge.”

Yocum said the cutterhead dredge is a large drill-like head that drills into the ground and sucks up the material, so the turtles are not present where the dredge is operating (buried in the sand).