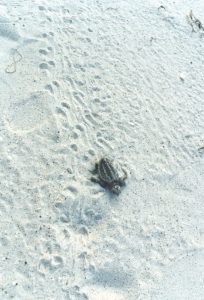 The final few weeks of sea turtle nesting season are quickly approaching, with the season officially closing on October 31.

“We are continuing to have a robust hatching season, and nesting activity appears to be over,” said Boca Grande Sea Turtle Association Board Member Melissa Csank.

As of September 28, the Association reported 730 Caretta caretta (loggerhead) turtle nests on the island. There were 562 reported false crawls (when a turtle comes up onto the beach but does not lay a nest). Five Chelonia mydas (green) turtle nests have been reported so far this year.

If you’re on the beach and see what you think is a red tide-intoxicated baby sea turtle, the best thing to do in that situation is to call the Florida Fish and Wildlife Conservation Commission (FWC) hotline (888) 404-FWCC and report it. FWC will then contact the BGSTA to pick it up. This allows FWC to track and document every element of the stranding, and they will work with the rehabilitation agencies to get the hatchling to the place that is most appropriate. It is not advised that you touch a hatchling, but if you think it is in distress, gently place it in a bucket with some damp sand, cover it with a towel, and wait for a volunteer to pick it up.

turtle’s shell or head, the turtle has already been documented, so there is no need to call the organization again.

Turtle patrol volunteers would like to remind everyone to keep their pets on leashes,

The Boca Grande Sea Turtle Association is committed to promoting education and awareness of sea turtles and proper beach protocols during nesting season.