SUBMITTED BY THE BOCA GRANDE HISTORICAL SOCIETY- The Community Center and the property around it have been an important gathering place for island people since it was built in 1929. Francis and Louise Crowninshield donated the property and helped raise the money to build a school for white children first grade through high school.
Louise also supported a school for black children nearer Port Boca Grande although to attend high school, these children lived with families in Fort Myers, Arcadia and other places.
The Boca Grande school operated under the Lee County Board of Education until 1965 when declining enrollment and the existence of a bridge to the mainland allowed the Board to close it and enroll the students in off-island schools. The unused building began to deteriorate. Windows were broken. Blowing rains damaged inside walls and floors. Vandalism caused more damage and grounds were untended and overgrown.
The GICIA was formed in 1971 and a few years later joined with the Boca Grande Community House (now the Crowninshield House), two Boy Scout troops, Lee County and, most importantly, the Boca Grande Woman’s Club to save the building and convert it into a community asset.
In 1973 and 1974, this combined group worked to replace the Center’s roof, repair and replace windows, add new electrical wiring and plumbing to support new heating and air conditioning systems, reconfigure the space, repair floors and replaster and repaint walls.
Outside they resurfaced the basketball courts, added lights and built tennis courts.The newly remodeled building and grounds became the Boca Grande Community Center which opened September 5, 1974.
A bit later on March 16, 1975, Reubin Askew, then Governor of Florida, participated in the dedication ceremonies.
During the next decade, many of the activities that persist until the present debuted. The annual Fun Run was inaugurated as was the first Bike Parade. The Boca Grande Community Theater, forerunner of the Royal Palm Players, staged plays.The Woman’s Club opened its room as did the GICIA. There was an emphasis on programs for young people and activity rooms were established. The auditorium, which had been badly damaged, was renovated and made available for large meetings, lectures, plays and other events. 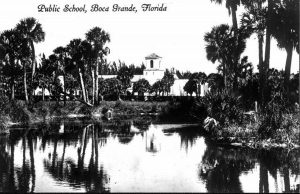 Winter resident Arthur Houghton suggested to his wife, Nina, that she involve herself in the Community Center. In 1986, she led the effort to establish the Reference Room to provide a research facility for both students and the community in general. At the time, the goal was to compliment the Johann Fust circulating library. The Arthur A. Houghton Reference Room later added publicly available computers and copying machines. In 1986 when the Friends of the Community Center was formed, Nina Houghton was its first president. Other board members were John Hudson, Kathy Futch, William Baldwin and Charlene Hargis. Dee Wheeler was the Lee County Director of the Center.
In the 1990’s, Joan Carroll succeeded Nina Houghton as leader of the Friends and with support of her Board raised more than a million dollars to expand, adding a fitness center and multi-purpose room as well as new tennis and basketball courts, an outdoor pavilion and auditorium improvements plus repairs to the buildings’ foundation and walls.  Finally, in 2001, the auditorium was gutted down to bare earth and unfinished walls and replaced with a sloping floor that allowed chair placement where all seats had good view of the stage. The new design also made the facility accessible to all. The stage was rebuilt using the original wood flooring and adding new curtains, lighting and sound system. The auditorium was now able to serve Royal Palm Player’s productions, weeknight movies, speakers provided by the community’s organizations and musical productions as well as providing a venue for community meetings.
Since 2000, the Reference Room facilities have been moved to the Johann Fust Library, with operations under the Lee County Library System while the Johann Fust Library Foundation is in charge of the building and grounds. Use of the Community Center has only increased as the community has grown with the Friends provide increased programs for children and adults as well as the recent addition of an outside stage. The Woman’s Club and the GICIA remain as occupants of the Center’s space.The addition of The Island School brings the property full circle from its 1929 purpose.
To learn more about the history of Boca Grande and Gasparilla Island, visit the History Center website <https:bocagrandhistoricalsociety.com>, like us on Facebook, or when open visit the History Center at 170 Park Ave. or call 964-1600. The History Center welcomes input from all.  Please send comments or questions to bocagrandehistoricalsociety@gmail.com.
The History Center Archives also invites the community to lend photographs, documents or other materials which it will scan and return to the lender.