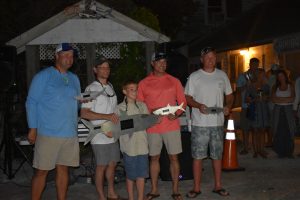 This was the second year the event was held and 18 fish were released.

Prizes were awarded at a ceremony immediately following the tournament.

Local fishing captain William Woodroffe organized the event last year with the goal of creating a fun, family-friendly tarpon tournament that would also give back to the island community. Funds raised last year were used for improvements at Whidden’s Marina.

“The family has been very good to me and Liz throughout the many years that we’ve fished here and I wanted to be able to give back,” Woodroffe said.

This year Woodroffe used $1,700 from tournament money to purchase Red Gill T-shirts to be sold at Whidden’s Marina store.

Participants celebrated with a dinner and live music after the tournament at the parking area at Whidden’s.

“It was definitely a good time and everyone followed Rule #17,” Woodroffe said.

Organizers are already planning for the 3rd annual Red Gill Invitational Tarpon Tournament which will take place in May or June of 2018.