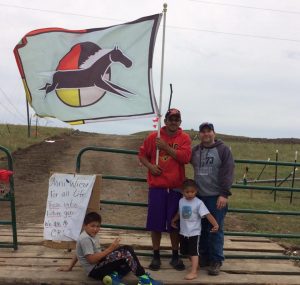 ■  BY LEW AUSTIN HASTINGS – Water. Water is the giver of life. Mni Wiconi in Lakota. Without water life ends. So it should be no surprise that one community has chosen to defend their water as they would defend their lives and in the process has attracted others to join them in solidarity.

That community is the Standing Rock Sioux Nation, whose reservation straddles the border between North and South Dakota. This community’s water supply comes from the Missouri River on their border to the east, and the Dakota Access Pipeline is ready to cross it from underneath about a half-mile upstream of the Standing Rock Reservation.

A half- mile upstream of the drinking water for thousands of people on the reservation. There are more than a few reasons why the resistance to this pipeline’s construction is significant. First and foremost, the members of the Standing Rock Nation did not choose to live where they live.

They were forced there with the creation of the reservation system more than a century ago. A system with such restrictions and regulations placed upon it by the United States federal government that everyday survival was, and in most cases still is, a struggle. But it is a home known to fathers and grandfathers, mothers and grandmothers going back generation upon generation. Sacred land that needs protecting.

The 1851 and 1868 treaties that established the boundaries for the Great Sioux Nation are being threatened here as well as tribal sovereignty and the promise of consultation with tribal government when a project of this magnitude, requiring U.S. government approval, affects the people of that tribal nation. Indeed, from the pages of the Dakota Access Pipeline’s own Environmental Impact Statement (EIS) paperwork, 33 archaeological sites had been identified within the construction easement, with a few needing further study to see if cultural resource management was needed and required.

No follow-up survey or study was done. Construction began anyway. Back in April, a spirit camp called the Sacred Stone Camp was established with only a handful of prayer warriors in an attempt to raise awareness of what was happening on the vast prairie of North Dakota near the confluence of the Missouri and Cannonball Rivers. Word of the camp slowly spread until tribal nations and supporters from around the country began to make their way to join their indigenous brothers and sisters.

News from outside the camp trickled in or was hard to come by. There is no wifi connectivity, and even phone service is mostly nonexistent. Yet there is connectivity between people.

When I left camp last week, 135 tribal nations had sent letters of support, sent resolutions of support or had arrived with donations for the thousands of people now coursing through the resistance camp, and more were on the way. This gathering is historic in nature and scope. Never before have this many tribal nations cooperated with one another on a single issue.

Tribes that traditionally were mortal enemies for over a century or more ended up camping next to one another, sharing stories, food and comfort.

Representing the Native Now Foundation, I was able to bring over a thousand dollars worth of donated food, water, blankets and first aid supplies to the camps. I was able to meet up with old friends, meet some new friends and spend time with my kin who live on the Standing Rock and Cheyenne River reservations and who are directly affected by this Dakota Access pipeline project.

Media reports have had everything from vandalism, threats of violence with pipe bombs and other weapons coming from the camp. I can tell you as someone who was on the ground and in camp for a week that I saw none of that. What I saw was a peaceful gathering of nations supporting, sharing and praying with one another, from the elders to the families with young children. It is an inspiring, engaging and extremely powerful place.

Hardly a conversation was held that did not reference the old ways and how this gathering represented a new normal in tribal relations and increased visibility in a country that has largely forgotten they still exist as a people and as a culture.

Values are on full display as children are exposed to native languages and cultural traditions that have faced extinction in varying degrees since the creation of the reservation system.

Still, in 2016 the struggle for sovereignty and self- determination comes daily for residents here. Services and basic creature comforts are often a luxury few can find or afford.

People who are willing to give up what little they have in accommodations to camp out on the open prairie with even less than they have at home should be a testament to the struggle and a teachable moment for the rest of the world.

Perhaps that is why defending water is so important to all gathered here at the camps on Standing Rock. They can appreciate what it means to sacrifice everything and still hang on and live. And they also know that without water, there is nothing left.

Perhaps that is why so many have chosen, and are choosing to #StandWithStandingRock and why you should too.

Newer PostObituary: Carolyn Smith Frederick
Older PostStorms are rolling across the water … are you ready?