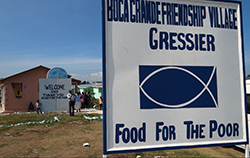 Thirty-three families who were left homeless by the devastating earthquake of 2010 have received new homes in a new village. Built by Boca Grande’s Hope For Haitians Committee through the international and relief organization Food For The Poor, the village is the committee’s fifth Friendship Village and marks the completion of 200 homes built by Boca Grande.

BY BEN SCOTT AND ANGEL ALOMA – Thirty-three families left homeless by the devastating 2010 earthquake have received homes in a new village in Gressier, Haiti. Built by Boca Grande’s Hope For Haitians Committee through the international and relief organization, Food For The Poor, the village is the committee’s fifth Friendship Village and marks the completion of 200 homes built by Boca Grande.

The transition of getting families out of tents and back into their homes has been our mission these last six years. This year has been the biggest improvement I’ve seen in this country since the earthquake. It’s really good to see the vast majority of tents gone from the city.

Scott, along with his wife Louise and Boca Grande Committee members Lou and Corie Fusz, attended the dedication of Friendship Village V in Gressier on Jan. 13. They were greeted by a group of jubilant residents from the new community consisting of 33 concrete block homes. Each home has a kitchenette, a sanitation unit and water cistern, and each family received a solar-powered light kit. Two solar-powered street lamps also were installed to illuminate the new village.

“Thank you, Mr. Ben and your beautiful wife. You said to me, ‘I am going to do it,’ and you did it!” said Pastor Mary Jesse, a village resident. “Thank you all for everything. On behalf of the people in this village, we say thank you, merci, merci.”

Boca Grande’s upcoming project is to raise funds for the completion of Friendship Village VI through Food For The Poor, which also will be located in Gressier. The sixth village will provide a community center and an additional 27 families with two-room houses, which will include kitchenettes, sanitation units and water cisterns. Each family will be given solar-powered light kits, and the village will be provided with two solar-powered street lamps.

The Boca Grande Hope for Haitians Committee began working with Food For The Poor in 2009, and it’s been really amazing to watch the seeds of loving kindness bear such beautiful fruit. Boca Grande has helped to transform the lives of hundreds of families who were in desperate need of permanent housing. May God continue to bless their efforts and their desire to make a difference.

Sponsored by The Gasparilla Inn Beach Club and Parsley-Baldwin Reality Inc., the Boca Grande Committee cocktail and hors d’oeuvres reception will be on Feb.16, 2016, at 6 p.m. at The Gasparilla Inn Beach Club, located at 445 Gilchrist Ave. in Boca Grande. Guests will hear firsthand from 2010 Haiti earthquake survivor Leann Chong about her experiences during the earthquake and her continuing journey of hope. There also will be an exclusive silent auction of Haitian artwork.

For additional information regarding the February 2016 Boca Grande event, call (888) 404-4248 or email rachelp@foodforthepoor.com.

During his recent trip to Haiti, Scott also visited an area known as Alpha Village, where donors are raising money to help these families. The village, located on the outskirts of Port-au-Prince, is situated between the sea and a garbage dump. The area is overcrowded with families who are living in tents with no access to clean water or sanitation. The stench of rotting garbage makes day-to-day living very difficult.

With the help of Boca Grande and all the support from around the world, they’ve made a lot of progress in Haiti, but there’s still a long way to go.

Food For The Poor, one of the largest international relief and development organizations in the nation, does much more than feed millions of the hungry poor in 17 countries of the Caribbean and Latin America. This interdenominational Christian ministry provides emergency relief assistance, clean water, medicines, educational materials, homes, support for orphans and the aged, skills training and micro-enterprise development assistance, with more than 95 percent of all donations going directly to programs that help the poor. For more information, please visit FoodForThePoor.org.

Angel Aloma is the executive director of Food For The Poor. Ben Scott is the chairman of Boca Grande Hope for Haitians.

Newer PostMemorial Mass set for Betty Jane Shiarella at Our Lady of Mercy
Older PostEditorial was good, but support still given to no parking