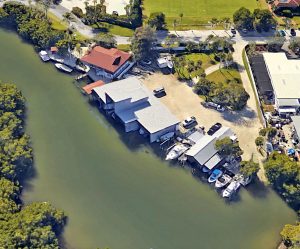 There was only one item on the agenda at the Boca Grande Historic Preservation Board’s meeting on Wednesday morning, but it unsheathed plenty of discussion.

The proposal was to demolish the existing boathouse at 789 7th Street East and construct a new two-story boathouse in its place.

“Staff finds that the proposed commercial marina building is architecturally appropriate for its location,” Blackwell said. “It’s a standard metal- sided marina building, with an expanded second floor with windows and offices.”

Blackwell said there is concern from one of the neighbors that the windows might by intrusive visually, but that issue will be addressed during the administrative process, and as such, it is not part of Lee County’s planning review criteria.

Applicant and Land Use Planner Brad Wester spoke on behalf of the owner and stated that the new building would not be any closer to the neighboring properties.

Board members brought up concerns regarding the size and makeup of the building, and Wester said those matters would be addressed by the Florida Building Code enforcement.

“There will be specific standards that we have to follow to keep the building to code,” Wester said.

“It’s at the point where it is not cost- effective to continually maintain it.”

Wester said the plans are a blend of what is there now with a more modern flair and more of an industrial marina look.

“We want to be good neighbors,” Wester said. “Yes the building is getting bigger, but it will be much nicer.”

Wester said Mr. Hoyt sent a letter to the County earlier this week, saying he was opposed to the proposal because of the office windows and deck on the second floor.

The Board opened the discussion up for public comment.

Jacque Hoyt, joint owner of the property and residence at 709 7th Street, said she was there to represent the family and thanked Wester for the information he shared.

“We, too, want to be good neighbors, and we understand this property is industrial-zoned,” Hoyt said. “We are looking forward to communicating openly going forward.”

Hoyt expressed concerns about the plans and the privacy issues that will affect her property.

“We are concerned about the second-story deck that would be directly across from bedrooms in our home,” Hoyt said. “We don’t necessarily want to have people staring at us while we are enjoying our own personal space.”

Hoyt also requested that the bulk of the construction process by done during the summer months.

No other buildings on the property will be demolished.

The current boathouse has 15 boat slips.

“We are rebuilding the configuration of those slips to accommodate our fleet,” Wester said. “The slips will be perfectly measured for our boats. The smaller skiffs will stay on the property, and there will be trailer parking. We will do everything within our power to make sure we are not a nuisance to our neighbors or the environment itself.”

A motion was made to accept the proposal without conditions, and it passed.

The next meeting is planned for 10 a.m. on Wednesday, February 13.