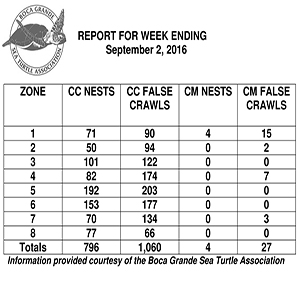 BY SUE ERWIN – Boca Grande Sea Turtle Association volunteers said the storms over this past weekend destroyed a good amount of the remaining sea turtle nests on Boca Grande beaches.

One volunteer said there were nearly 40 nests just before Hurricane Hermine, and she counted only about 12 existing ones on Monday, September 5.

Turtle patrol volunteer Melissa Csank said turtle nests on the island were hit hard by the effects of Hurricane Hermine, but the severity was dependent on the area of the beach. For example, Zone 3 (Boca Grande Club) lost 65 percent of the remaining nests, but Zone 4 (north of the Boca Grande club) lost none.

“One unique feature of this storm,” Csank said, “is that it deposited a significant amount of sand onto many portions of the beach, covering existing nests with 6 inches to 3 feet of additional sand. This will make it more difficult, but not impossible, for hatchlings to emerge from the nest. One other issue is that nests that stayed under water for a number of days potentially may be waterlogged. So post-storm hatching success remains to be seen, but luckily, approximately half of the nests on the island had already hatched.”

On average, sea turtles lay 110 eggs in a nest, and they average between two and eight nests each season. The eggs will hatch in 45 to 60 days after a nest is covered.

Only 1 in 1,000 hatchlings will survive to adulthood. They can live to be more than 100 years old. Hatchlings face many predators, both on their way to the water and once they get into the ocean. On the beach, birds, crabs, ants, bobcats, raccoons and coyotes and even unleashed dogs are common threats to nests and newly hatched turtles.

For more information, go to facebook.com/seaturtleawareness to find out more details.