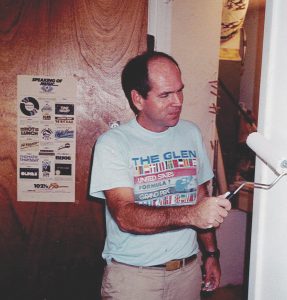 The following is an interview/autobiography (to date) of Boca Grande’s island newspaper, the Boca Beacon. We felt it best to let the paper speak its own words, and only a little proofing was required.

When Henry Steel Commager said a true newspaper “is the raw material of history, the story of our times” he could have been talking about me, the Boca Beacon. For as small of an island as we live on, a great many things have occurred here that will forever be remembered in history. My founder, Marnie Banks, believed in the island the people who live here. To her, it all meant something very dear. Even back when she started the paper in 1980 it was as if she could see the change coming; she knew that what was once a little fishing and railroad town would one day be something more.

When Dusty and Terry Hopkins made a promise to Marnie Banks on July 27, 1988 to stay true to my beginnings as a real small-town newspaper, I didn’t know what was to become of me. I had been coddled and loved by the people who read me, as well as the people who created me, for almost nine years at that point. I knew I had a place of prominence in the community, but I could see Marnie wanting me to grow … and she knew it would be someone else who would have to help me with that.

In the first few weeks after the decision was made to transition ownership, I started to feel like things were going to be just fine. Terry Hopkins had been in the newspaper business for a long time, having just left the Fort Myers News Press that same year, and having come from a newspaper family. They had worked papers in August, Portland and Waterville Maine, as well as in New York at the Ithaca Journal, in Washington D.C. and in Connecticut.She and Dusty moved to the island permanently not long before they purchased me, and quickly became well-known in the community.

But for nearly nine years before that, it had been Marnie who poured her energy and love into me, and made me her labor of love (her words, not mine). She worried about our environment, she helped to save the Port Boca Grande Lighthouse when it was about to fall into the Pass. When there was a community event, Marnie was there not just with a camera but with helping hands as well.

I remember when she first brought me to life, with a little help from Jack Harper. Back then they published me from the old Kuhl house on Palm Avenue. Just prior to that Marnie had worked for a radio station that was being sold. There hadn’t been a newspaper on the island since Clem Johnson published the Boca Grande Journal in 1949 for almost one year. I was born right around Christmas time in 1979, but Marnie and Jack went ahead and made my official birthday January 1, 1980. Back then we only came out once a month, and news some months was quite scarce. There was usually an environmental issue to talk about, maybe some pot smugglers or Indian mound robbers, and of course there was always fishing news. The island population even then wasn’t anywhere near what it is now, even during season.

In May of 1980 Marnie’s parents helped her buy Jack Harper out, and they pitched in to help her in small ways. She extended my news reach to the surrounding barrier islands, and to Placida and Cape Haze. I had about 1,150 people subscribing to me at that time, from all over the country and the world.

When Marnie realized she had an obligation to the community to become a weekly paper, she also realized she had other goals she wanted to pursue in life … and putting out a monthly, then bi-weekly paper was already more than enough work for her. That was when she put the word out to find me a new owner.

I remember she said, “It was not an easy decision to part with the paper, but I feel strongly that the Hopkins are the perfect people to take the publication weekly. The islands need and richly deserve a weekly newspaper.”

Back in the day I was printed in Clearwater, and Marnie (and later, Dusty) would drive up every week to pick me up. Eventually they purchased Gulfcoast Press, and I was printed in Naples. Now the drive is much quicker, as I am reborn every week from a printing press at the Venice Gondolier.

Marnie was the only full-time reporter until 1985 when Stephen Kleege came on as a news editor. There were many other contributors, though, just as there are now, who occasionally came up with a news article or fishing piece.After him came editors Al Parsons, John Eubanks, Dave Holmes, Marilyn Hoeckel, Gary Dutery and, now, Marcy Shortuse.

Kathi Strapp, who just retired from the paper within the last five years, was also there since the late 1980s (she was one of the original people Dusty hired). Daniel Godwin is still my art director, as he has been since October of 1986.

There are those who might think it’s easier to create a newspaper once a week in a small town, but in reality it is quite the opposite. When you’re the only news in such a small place where everyone knows everyone else’s business, being seen in the Beacon can be an extraordinarily good – or bad – thing. Each word is scrutinized with a little more intensity because, after all, I am the only recorded history now for our daily goings-on.

For such a small paper with only two reporters (including the editor), two advertising representatives, one graphic designer and a staff of two manning the office, it’s a lot of work to keep me going. Luckily it is still a labor of love for all of the staff members who share my masthead, and hopefully will continue to be so for many, many years into the future.