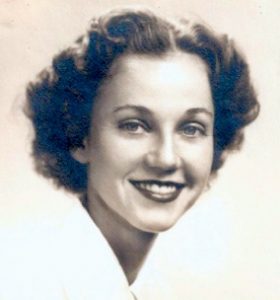 Stolley, Helen Elizabeth (Bette) Scott Vogt of Sarasota, passed away peacefully on December 21, 2018 after 94 years of an adventurous and gratifying life. She was loved and respected by so many people due to her giving nature, sweet and loving personality and lighthearted sense of humor. Hers was the epitome of a life well lived.

Born in Cincinnati in 1924, she was preceded in death by her parents, Lindsey Lee Scott and Helen Marie Cooper Scott Tune, step father Mason Tune and her sister Mary Jane Scott Miller.

Bette loved to dance and after graduating from Old Woodward High School, she did so as part of “Ken Murray’s Blackouts” in Hollywood and later as a dance instructor at Arthur Murrays during World War II. There she met and  married one of her students, Carl Fredrick Vogt, president of the Vogt Warehousing Corp, who preceded her in death.

In 1973 she married Alexander “Sasha” Stolley, founding partner of the Northlich – Stolley advertising firm, who preceded her in death. During their marriage they travelled and sailed extensively and divided their time between their homes in Cincinnati, Boca Grande, Florida and Interlochen, Michigan. Bette is survived by Sasha’s five children, Christopher Stolley, Peter Stolley and wife Christine Holtz, Laura Stolley Smith and husband Timothy Smith, Annabel Stolley and Megan Berry.

In addition to dance, Bette was a talented painter and prolific writer, penning many short stories about her interesting and unique life experiences. In the 1970’s she worked as the Volunteer Coordinator at Providence Hospital. She was one of the founding members of the Dirt Plotters Garden Club of Cincinnati, a dedicated supporter of the Cincinnati Zoo, Symphony, The Contemporary Arts Center, The Cincinnati Nature Center and The Interlochen Center for the Arts. Always passionate about learning, at age 60, she pursued her undergraduate degree at The University of Cincinnati, graduating in her mid 60’s.

The final years of her life were spent at The Glenridge on Palmer Ranch in Sarasota, Florida. A memorial service and celebration of her life will be held at the Covenant First Presbyterian Church at Garfield Place in Cincinnati. Condolences are welcomed by the family at fcvco@verizon.net, and for information about service date and time.