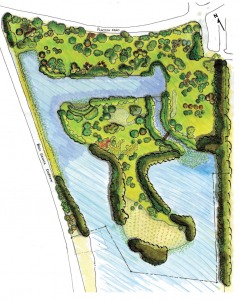 The Gasparilla Island Conservation and Improvement Association (GICIA) is pleased to announce that the State permits for the Mercabo Cove Project have been issued.

This project, which will transform the basin area of the Mercabo Preserve into a marine sanctuary, will provide long-term benefits, including improved water quality, enhanced fish and bird habitat, reduced seawall maintenance costs and visually enhanced views of the preserve site.

The GICIA’s preliminary vision for the Preserve was to purchase the property to prevent impactful development at the gateway to Boca Grande. Through the generosity of our community, the GICIA was able to close on the property in January 2016. Once purchased, the GICIA began to transform the 30-acre site into a natural sanctuary for native wildlife that would also be visually attractive.

During the first year of ownership, demolition of the 13 buildings was completed and eco-restoration plans for the 30-acre site began. That summer over 3,000 native trees, grasses and shrubs were planted on the site, which resulted in GICIA being honored as the Grand Award Winner of The Florida Nursery, Growers and Landscape Association (FNGLA) Landscape Award for 2017 Florida Friendly Landscape™ awards.

With the uplands phase of the restoration successfully completed, GICIA turned its attention to the basin, now called Mercabo Cove. At the 2018 GICIA annual membership meeting, Coastal Engineer Hans Wilson presented the conceptual plans for an innovative project that would significantly improve the water quality while increasing habitat. The innovative plans re-engineered and repurposed the existing 4,700 linear feet of seawall by removing the seawall caps and the existing sidewalks and using that crushed concrete as riprap.  Riprap is concrete pieces approximately 1’ x 1’ in size that, when placed along the base of a seawall, provides habitat for juvenile fish and substrate for oysters to settle upon. Riprap also helps to fortify the remaining seawall.Besides riprap, other techniques such as the planting of mangroves and placement of reefballs (dome-shaped concrete structures that provide similar benefits as riprap) will be utilized to aid in habitat enhancement.

One of the most interesting and visually appealing aspects of this plan is the construction of a tidal creek that will allow the free flow of tidal water, significantly improving water quality in the entire Cove system. The Cove project plans also include the addition of clean fill, which will reduce water levels. Finally, the shallower, cleaner, clearer water will allow for the possible reintroduction of seagrasses, which are critical to water quality, juvenile fish, turtles and manatees. Estimated cost of this state-of-the-art project is $2,000,000 and when completed will be the crowning touch to the eco-restoration efforts on this important parcel that sits at the gateway to Boca Grande.

GICIA is expecting the federal permits for the project to be issued by the end of 2019. Land Conservancy Chairman Andy Krusen is hopeful that groundbreaking will take place in early 2020 and be completed by midsummer. Krusen said, “The GICIA kicked off our fundraising drive this past Tuesday at the annual past GICIA director’s breakfast, and we hope this important project will draw interest from the entire Boca Grande community.” The environmental and aesthetic impact of the project is something GICIA is very excited about. Once completed, Mercabo Cove will be a marine sanctuary for birds, juvenile fish, dolphins, turtles, manatees and the federally listed small-tooth sawfish.

GICIA is extremely proud of the restoration efforts that have already been completed and would like to share this special site by offering guided tours this spring. The tour dates are set for February 27, March 7, March 18 and April 10th. These guided tours will begin at 9 a.m. and will be limited to 10 participants. GICIA members and donors to Mercabo Preserve will have priority on these limited tours. To sign up for a tour or contribute to this exciting project, please contact the GICIA office at 964-2667.