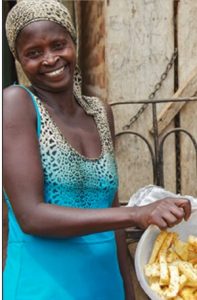 Rosette is 19 years old and was living with her husband and one-year-old son in a mud house in a swampy area that flooded every time it rained. At first, her husband forbade her to attend Street Business School. She persisted and was able to begin her tiny vegetable stand with the equivalent of just 85 cents. Her business was so tiny – just a few eggplants – that her neighbors laughed at her, which made her angry. In response, she wrote “Work Not Words” on the side of her house. And then she got busy.

Rosette was able to grow her business, making more than $11 a week in profits. She has now saved over $115 to buy a plot of solid land where she and her husband can build a new house. Rosette said, “Now my neighbors say, ‘That lady is getting rich’ and don’t laugh anymore.” Even better, Rosette’s husband is proud of her, encourages her to work and gives her a bigger role in making household decisions – after all, she is the one with a nest egg to purchase land! Rosette’s success is just one example of how teaching women to become entrepreneurs and earn sustainable incomes can help change perspectives and cultural views to create gender balance, not to mention lifting entire families out of poverty.

So what is Bead for Life’s Street Business School? Developed over two years by our staff, Street Business School’s team crafted a three-pronged approach to help women in Africa leave poverty behind: They introduce the concept of entrepreneurship, give women the knowledge and business skills to succeed, and empower them to believe success is possible.

Street Business School’s programming has already reached 54,000 Ugandan women – and the results clearly show that small business ownership has the potential to change lives. The average Ugandan graduate earned 211 percent more after completing Street Business School – going from $1.35 a day, on average, to $4.19 two years later. Those previously living on less than 65 cents a day earned a remarkable 15 times more.

Beyond earning more money, business ownership can help women break the mental shackles that often come with a life of poverty. When you are an entrepreneur, you are in charge of your own destiny – and this flexibility, particularly for women in Africa, is very important. The social constraints facing these women create a sense of being in control, something that many of them have never known.

Of course, it’s one thing to cite entrepreneurship as a way for these women to succeed, but how can organizations actually train underserved women to overcome lifetimes of economic struggle and low education and emerge as business owners?

In the case of SBS, coaches focus on simple, practical solutions that are shaped by the needs of local communities.

SBS trades formal conference halls for mobile classrooms that meet students where they are – both literally and figuratively. Training is held in the local community to be more accessible – in a church or a school with which  they are familiar.

SBS gives its training in the local language and leans on relevant metaphors to teach basic business concepts like market research and customer care. As an example, one of our coaches will say, “I’m taking the bus to the village. I have a backpack with me, and I want to show you what I’m taking.” The coach proceeds to hold up items like a water bottle, toothbrush or handkerchief, and puts them in the backpack one by one. After about 20 items, students are asked to recall what’s inside the backpack. Inevitably the women quickly realize they can’t remember everything. We talk about how this applies to record- keeping. If a woman is selling three different vegetables at her roadside stand, we urge her to understand which vegetable is bringing in the most revenue. She might make a simple apron with three pockets and deposit monies into each pocket from each vegetable in order to see which one is making the most money. This way she can plant more of one and less of another. Lessons like these may seem simple to us, but these visual trainings give these women confidence, as they can readily grasp scenarios that are relevant to their lives.

Nearly 90 percent of SBS graduates are still running a business two years after graduation, and more than 40 percent have opened a second, third or fourth business.

The belief in oneself is the biggest barrier to women becoming entrepreneurs, in Africa particularly. Along with one-on-one mentoring from coaches, every SBS training features former graduates sharing success stories. Students listen intently as women whom they can relate to describe how their trepidation was replaced with a resolve to put the tools they learned into action – and the successful businesses they launched as a result.

At its core, entrepreneurship is about self-sufficiency and, as programs like SBS prove, helping people make real change in their own lives through business ownership. This can have a much more lasting impact than the one-time handouts employed by many other well-meaning organizations. Helping them learn the tools to be successful  gives them a sense of pride that can only come from their innate abilities to struggle and succeed.

The curriculum developed by Bead for Life two years ago has now trained women in the following 11 countries:  Uganda, Kenya, Malawi, Burindi, Zimbabwe, Rwanda, South Africa, Ghana, Tanzania, Somalia and this April’s graduates from Cameroon. In the next three years we will expand throughout Africa and Asia. We have a social franchise model. We know there’s no one-size-fits-all solution to global poverty, so we are taking the proven intervention that is Street Business School – those components that are critical – and asking our partners to bring their expertise of their local communities – the politics, the religious and gender norms – and customize the program based on their needs.

What is the cost of teaching one woman in SBS? It is $346 for a woman to attend six months of school.

The cost for the Immersion Workshops for people coming to train from other countries is $4,600. The training is held two to three times a year over eight days. They are given lodging, three meals a day and coaching for six day-long sessions with the handbook, trainer workbooks, a video of an SBS alumna to inspire participants, and implementation materials. The participants must speak, read and write well in English. They must start their training in their own country within six months, and they must share their evaluation materials. As an organic nonprofit, we are constantly tweaking the curriculum to improve it from evaluations, and are always open to suggestions for improvement.

Nancy Akoth came to Kampala in 2002 when she fled from the raging civil war in northern Uganda, unable to continue her education. Since she was out of school, she got married and had one biological child. However, Nancy is a mother to many, raising nieces and nephews of relatives who have passed away. She provides food, school fees, healthcare and housing for them all.

Many women Street Business School serves, like Nancy, do not have access to clean water. Their families often spend hours to secure five gallons of water, often collecting water from wells or commercial taps outside their homes. Before Nancy joined SBS, she worked as a housemaid, earning 2,600 UGX/day (74 cents). The closest thing she had to a water source was a spring, which was more like a puddle. Animals drank from it, and builders got water there for creating bricks.

SBS played a pivotal role in changing not only Nancy’s life, but lives within her community. During the training, women participate in three consecutive sessions that help them get out of their comfort zone: learning the principles of starting small, identifying a business opportunity and finding capital. This is exactly what Nancy did. She saw an opportunity that arose from the water deficiency facing her community. She acted quickly and decided to improve the water hole to provide water for domestic use. She dug a deep and wide hole, put concrete at the base and raised it above ground. She opened this to her community and began providing her neighbors clean and healthy water for a small fee.

On the days when the commercial faucets are down, Nancy can make up to 40,000 UGX/day ($11 U.S.), and she increases her income 15 times! Nancy makes sure the water hole remains clean and efficient for her community. “My water is clean, and I keep the children and animals away, which makes people love my water.”

She runs her business with diligence, grace and commitment to better her community. Nancy’s future plans include starting a baby clothing business. She encourages women like herself to start small and press on.

JFK said, “One person can make a difference and everyone should try.”