SUBMITTED BY THE GICIA- The Gasparilla Island Conservation and Improvement Association (GICIA) is pleased to announce that the restoration of the Sam Murphy Park has been completed. The GICIA is delighted with the beautification efforts and encourage everyone to stop in and enjoy this quiet oasis in the middle of downtown.
The GICIA will proudly celebrate its 50th Anniversary in 2021. The Association was planning an all-inclusive community celebration but with the pandemic it became necessary to find a Covid safe way to recognize its 50 successful years protecting Boca Grande. After careful thought, the GICIA agreed on a two-pronged approach to mark this special occasion. The first, initiate a centraliz 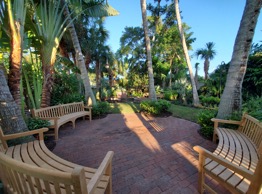 ed project that would be a visible reminder of the GICIA’s ongoing commitment to the Boca Grande Community. The second, through media, membership mailings and thegicia.org use the “Imagine Boca Grande today if there had been no GICIA” theme to highlight the organization’s many accomplishments, which have aided in preserving island life since 1971.
It was unanimously decided by the GICIA Board that restoring the much-loved Sam Murphy Park, nestled in the heart of the Boca Grande village, would be a perfect 50th Anniversary celebration project. Landscape architect, Mary Ellen Flanagan of Tropical Landscapes, was hired in August to design and implement a beautiful new landscape plan. Working with Luis Mendoza of Gasparilla Landscape Service, Mary Ellen has revitalized this special little park, which will reopen to the public on Monday, October 19th.
The property for the Sam Murphy Park, located at 355 Park Avenue, was purchased by the GICIA Land Conservancy in January of 2000. When first acquired the property was vacant and unkempt. The GICIA Land Conservancy Committee Chairman, Sam Murphy, and Committee Member, Edmund Pratt, were committed to the creation of the Park and working with landscape architects they oversaw the completion the original park construction that summer.
It was the spring of 2002, following Sam’s passing in 2001, when the park was officially rededicated as the Sam Murphy Park. Sam was elected to the GICIA Board in 1990 and went on to serve a year as Vice President and six years as President. During Sam’s tenure, the GICIA dealt with many important island issues but most importantly it was his vision and leadership that initiated the creation of the GICIA Land Conservancy. At the 1996 GICIA Annual 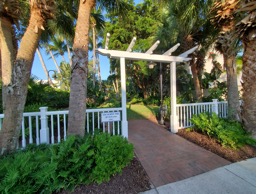 Meeting, President Murphy told members “according to present plans, there will be some 650 new houses built, with over 1,500 new residents of Boca Grande. Added to the expected increase in tourist traffic, those numbers suggest that the viability of our village and the tranquility of life may be threatened unless we can take effective action to preserve some of our remaining open spaces as conservancy land.” Sam’s words at that Annual Meeting solidified the creation of the GICIA Land Conservancy that now owns nearly 300 acres on and around Gasparilla Island. This land, which holds substantial environmental and aesthetic appeal, will remain undeveloped and forever protected by the GICIA. Now imagine Boca Grande today if there was no GICIA.
When the Sam Murphy Park reopens on Monday everyone is encouraged to take a moment, slip into park, relax in the shade and “Imagine Boca Grande today if there had been no GICIA.”
If you have any questions or would like to become a member, please call the GICIA Office at (941) 964-2667.