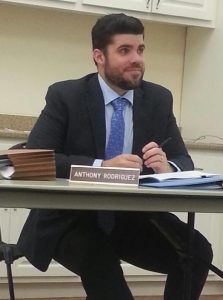 At its monthly meeting on Wednesday, June 14, the Boca Grande Historic Preservation Board rejected a proposal to relocate a guest cottage located at 300 Third Street West to Matanzas Pass in Fort Myers.

The cottage was built in 1925. The owner of the cottage approached Lee County Parks and Recreation staff and offered to donate it for educational purposes.

The owner offered to split the cost of relocating the cottage with the Friends of Matanzas Pass Preserve.

In 2016, the owner requested that the cottage be demolished,and the Board denied that request. Lee County staff recommended that the Board approve the move.

The item will be part of the Lee County Commissioners meeting on Tuesday, June 20.

Item A on the agenda was a request to add a screened porch and an ADA handicapped access ramp to the rear of the residence at 151 Park Avenue.

Engineers on the project said no historical features would be removed, and they would also be using salvaged bricks for the addition, to be cost-effective. Lee County Planner Peter Blackwell said the brick patio is a nonhistorical feature, and staff recommends approval from the Board. The motion passed.

The third item on the agenda was a memorandum concerning 291 Palm Avenue. It was a request that staff prepare a designation report to change the property from contributing to noncontributing. Right now, it stands as a contributing property.

He gave a detailed presentation at the April Historic Preservation Board meeting and discussed conversations he had with Lee County planners in 2016, who said the property is indeed a contributing property within the historical district.

Board members split the vote 3 to 3 at the April meeting, and the request for an addition to the property was denied.

David Benner of Safety Harbor Building said this request was not procedurally correct and strenuously objected to a redesignation of the property.

“We’re talking about a memorandum,” he said. “We shouldn’t even be having this conversation, and it should not be part of a public hearing. It was categorized incorrectly.”

Corcoran agreed, saying that the process is not fair. “I understand as a Realtor that I needed to do my due diligence before purchasing the property, which I believe I did,” Corcoran said. “There’s a big difference when it comes down to changing a structure from contributing to noncontributing, and that can greatly affect the future value of my home.”

He said the fact that the house was severely deteriorated years before he owned it should not reflect the state of it today.

“At this time, given the history of the property, we are seeking input from the Board as to whether or not the property should retain the status as contributing,” said Blackwell. “We have to recommend that you recommend something to us before going forward.”

The Board voted to reconsider the request for a designation report from the County to change the property status.

The final item on the agenda was a request to add an addition (garage) to the west side of the house and remove a porch at 291 Palm Avenue. Lee County attorney Michael Jacobs said that, since the Board voted to get a designation report from the County, it would not make sense to vote on this issue until that report is provided and reviewed by the Board.

Anthony Rodriguez from Lee County Zoning said the County has done some internal reorganization, and the Boca Grande Historic Preservation Board now will now include the zoning department in regard to addressing the monthly agenda items.

The next meeting is planned to take place at 10 a.m. on Wednesday, July 12.