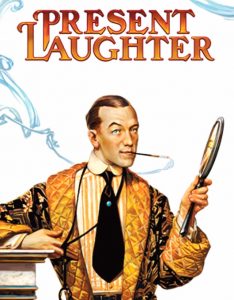 The great cast is once again honored to be in the very capable hands of Director Tad Ingram, who has over some years been able to share his directorial skills to continually challenge us and learn how to “play.”

The story Noel Coward spins is about a famous egotistical, affected actor named Garry as he prepares to travel for a touring commitment in Africa. Amid a series of hilarious events, he has to deal with women who want to seduce him, placate his long-suffering secretary and his estranged wife, cope with a crazed playwright and overcome his impending mid-life crisis.

Notes of interest: Noel Coward starred in the first production in 1942.  It was written in 1939, before the outbreak of World War II. Winston Churchill advised Coward that he could do more for the war effort by entertaining the troops and the home front. He starred in the lead role, produced the show and continually entertained a British public in need of uplifting during the war.

Here’s hoping you are one of the lucky ticket holders for the nights of February 13, 14, 15, 16, at 7 p.m. and Sunday, Feb. 17 at 5 p.m. Often ticket holders at the last moment have to cancel, so calling the office the day of performance or coming early to the show to see if seats open up is always a possibility.