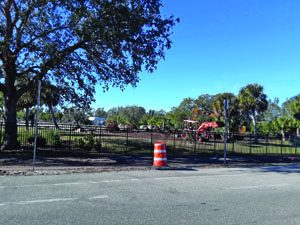 The Gasparilla Island Conservation and Improvement Association (GICIA) continues its efforts to improve the natural beauty of the Preserve Site located just off the Boca Grande Causeway in Placida. During the first year of ownership, we completed the demolition of the 13 buildings that once occupied the site and then embarked on a large eco-restoration plan for the 30 acre site, which included planting native trees, grasses, and shrubs. We are very pleased to announce that this project, managed by Forestry Resources Ecological Inc. and our Certified arborist and Consultant Rick Joyce, was so successful that it was honored as the Grand Award Winner of The Florida Nursery, Growers and Landscape Association (FNGLA) Landscape Award for 2017 Florida Friendly Landscape™ Awards.

Although much of the site is green the area at the northwest corner of the property, which was once the location of tennis courts, was so compact that our attempts to seed this area with native grass and wildflowers was not successful.   So, if you have driven past in the last few days you may have noticed some heavy equipment working on the site. After a great deal of consideration and following the advice of our consultant we have brought in the heavy equipment to break up the compact material that was used to stabilize the tennis courts. Once the turning of the soil is completed the area (just the size of tennis courts) will be sodded so that area will be as green as the rest of the site.

Although we are very proud of all the work that been accomplished in only two short years, GICIA continues to work with consultants to find ways to improve all of the recourses on this highly visible site. In 2017 we hired Hans Wilson of Wilson Engineering to assist us in an exciting effort to restore and significantly enhance water quality and habitat within the basin itself.   This is an exciting project that is estimated to take three to five years to complete. The project will include removal of some of the vertical seawall, placement of reef balls and other habitat enhancement structures, planting of mangroves in front of the wall in some areas and behind the wall in others, and even creating a tidal creek from the most easterly section of the canal through the property to the bay side to create flushing, which will significantly improve water quality in the basin.  Beyond these efforts, we are also discussing the possibility of creating a shallower area within the basin by adding appropriate fill so that we may embark on a seagrass restoration effort.

With a project of this caliber and scientific importance GICIA has attracted the attention of Edwin (Win) M. Everham III who is a Professor of Marine and Ecological Science at Florida Gulf Coast University.   Win was a Founding Faculty member of FGCU and is Co-Program Leader for Environmental Studies. His scholarship focuses on the response of ecosystems to disturbances. His research has included: the impacts of exotic invasion and exotic removal in wetlands; fire ecology in exotic infested systems; ecological dynamics of stormwater ponds; freshwater lake restoration and recovery; changes in herpetafauna communities through time; Vallisneria restoration in freshwater lakes and rivers; impacts of mosquito control on non-target species; and the response of ecosystems in SWF to hurricane disturbance. He teaches numerous courses at the University and has recruited one of his graduate students, Gianna Diaz who is a first-year graduate student at Florida Gulf Coast University pursuing her Master’s degree in Environmental Science at FGCU to join the project. Gianna was born and raised in Clearwater and attended Florida State University for her undergraduate studies. At Florida State, she earned a Bachelor of Science in Environmental Science.   She has studied a variety of topics including: Ecology; Structural and Physical Geology; Mineralogy; Coral Reef Ecology; Environmental Science Modeling; and Geographic Information Systems. After graduating Gianna hopes to explore work with a non-profit, a federal agency, or further pursue higher education.

There is no question that having Gianna and Win as part of the basin restoration effort will add depth and bring academic creditability to our project, which will, in turn, bring it more success. GICIA will release details of the project as we move toward but at this point, we expect at are anticipating 18-24 months to obtain the required state and federal permits.   Of course, we appreciate that none of this would have been possible without the help of the over 1100 individuals that contributed to the purchase this important parcel. Thank you! If you are not currently a members and would like to receive our mailings regarding this and all the exciting and important work GICIA does for our community, please contact the GICIA Office at (941) 964-2667.