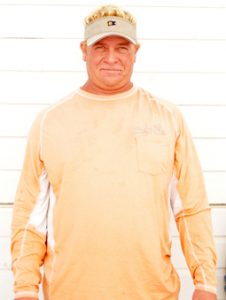 Stuie Middleton was born in Boca Grande. His earliest memories include spending late nights in the Boca Beacon office when his mother, Patti Middleton, well-known Boca Grande artist, helped the former staff put the paper together every week. Patti would bring a playpen to keep Stuie occupied.

“When they were doing the newspaper – it was just the two of them – they’d spend all night on Thursday putting it together. We slept on couches or whatever we could find waiting for them to finish,” he said. Growing up on Boca Grande was a treat for Stuie, an avid fan of all things outdoors.

“Originally I grew up on Tarpon Street, and then we eventually moved down to the south end, so I spent a lot of time fishing on the phosphate docks,” Stuie said. To sum it up, he said he pretty much grew up playing in the water: fishing, surfing and diving. He remembers the island before many of the developments were built. “Where Boca Bay is now, that was all still railroad tracks.”

He recalls running around the island, pool-hopping with friends and going fishing almost every day.

“If you grew up here, you had to like the water, because it could get kind of boring if you didn’t,” he said. He described the Boca Grande he grew up in as being a quiet little place, where everybody knew everybody. “You couldn’t keep any secrets here,” he said.

He remembers how a local deputy went to his mom’s house, asking where the boys were, always wanting to keep an eye on them.

“If he didn’t see us all day, he figured we were up to no good,” he said. One of his first jobs was working at the Laff-A-Lot (where South Beach is now) on weekends when he was 13 years old. He also worked for Dixie Hollins, running his boat over at the last “Damn” street on the island.

Since The Island School didn’t exist yet, he attended Englewood Elementary School and transferred to Vineland Elementary School in third grade when it was built. He continued on to L.A. Ainger Middle School and then Lemon Bay High School. He played football in high school, and Friends of Boca Grande Boca Bunch Director D.J. Keisling was his linebacker coach. He tried wrestling for a while but didn’t care for it so much. He wanted to join the swimming team, but it coincided with football season, so he had to pick one. After high school he did quite a bit of traveling and visited New York, Oregon, the Bahamas and the Virgin Islands.

His father, Stewart Senior, was a block and brick mason and built many homes in Rotonda, so Stuie learned that trade from him, but he didn’t really enjoy it. So he started working with a friend, Jeff Pringle, doing arborist work. He’s been working with Jeff at Gulf Coast Tree Service for the past 15 years. He said most of his work is done on the island. “Jeff’s family has been on the island for a while, so everybody knows him and we stay pretty busy,” he said. Stuie also does a lot of commercial fishing and works on boats as well. He once lived in Cooperstown, New York for five months to help out friends who had a boat yard.

He also spent several months living in Oregon, but he realized he really wanted to live back home in Boca Grande. “I’ve been all over, but I love southwest Florida. It’s unique compared to anywhere else I’ve ever been. It’s nice to get away, but it’s really nice to come home.”

He is a regular diver and enjoys recreational spearfishing. He has caught his share of grouper, snapper, cobia and, once in a while, a few lobsters. Stuie is a surfer and rides waves here when they’re big enough. He has surfed up and down the Pacific west coast and often takes trips to the east coast of Florida. He recalls that before he could drive, there was a young man, John Foster, who taught him to surf.

“He’d take us island kids over to the other coast on the weekends. We’d leave around 3 a.m., spend the day surfing and then drive back. It was a lot of fun,” he said. When he is not working, he spends a lot of time fishing on his 1968 22-foot Aquasport, a flats/bay boat. He regularly catches tarpon and sharks. “Anything that swims,” he said. He enjoys bass fishing in the fresh- water ponds in Rotonda and Cape Haze.

“It’s something different and it’s very peaceful,” he said. He also enjoys taking weekend trips to the keys, and bird/deer hunting whenever he gets the chance. He remembers going bird hunting in Rotonda before it became a protected wildlife sanctuary. Stuie currently lives in Grove City.

“There aren’t too many of us who live on the island anymore now that it’s gotten so expensive,” he said. Stuie is not married and has no children. He said he’d like to get a dog, but he isn’t home enough to spend time with one. He has one younger brother, Leith, who does boat work on the island. He said the person he admires the most in life is his mother, Patti. “My father died when I was 15, and she did a great job raising my brother and me,” he said.

While it was difficult losing his dad at such a young age, he recalls that the island residents were very supportive and helpful to him growing up.

“Braxton Bowen and Nat Italiano used to take me out on weekend duck hunting trips in Okeechobee. And I did a lot of things with the Boca Bunch, so I kept pretty busy,” he said. His favorite part about his work is that there is always something different to do every day. “It’s not the same old routine thing, and it’s nice working around people you know,” he said.

If you see some massive trees being taken down around town, there’s a good chance you’ll find Stuie working nearby with some very heavy equipment. Remember to wish him a happy birthday this weekend, too.