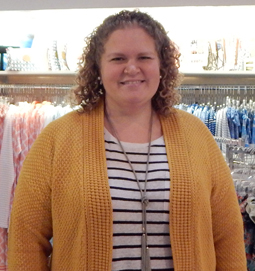 If you’ve been browsing through the beautiful items at Ariel, Ltd. on the island recently, you were very likely greeted by sales associate Penny Lach. Penny is the oldest daughter of Lori and Ike, of Redfield, Ala. Her family moved to Florida when she was in second grade.

Her father worked as an oiler for a paper mill and was transferred to Jacksonville, Fla. She attended elementary school in Jacksonville, and then her family relocated to the town of Yulee, part of the Jacksonville metropolitan area, when she was in fifth grade. “We actually lived in Yulee for many years, and my parents still live there,” Penny said.

At the time, Yulee didn’t have a high school, so she went to school in Fernandina Beach. After graduating from high school, Penny worked at a gift shop called Ship’s Lantern, near Amelia Island. She started college the next year at the University of Florida and studied architecture.

After a year, she transferred to the University of North Florida and studied photography.

“I just wasn’t happy at the University of Florida, and I decided to move back home. It was there that I discovered a natural love of photography,” she said.

She met her husband Chad when she was 19, while she was attending the University of Florida. Chad was a park ranger in Jacksonville at the time. “He just happened to be at a Christmas party for park volunteers, and we met and started talking. I mentioned that I wanted to take a photography class, and he offered to lend me his camera,” she said.

Penny and Chad have been together since December, 1999. They were married in October of 2002. Chad received a job offer as an assistant park manager in Naples, so the couple relocated there and lived there for seven years. Chad is now parks manager at Gasparilla Island Parks Administration. He has been working with the parks service since 1998, starting with a job in Ohio.

Penny and Chad moved to Boca Grande in July of 2008, when Chad learned that the former parks manager was retiring.

“He had talked about working in this area for a while, and he was just waiting for the right opportunity,” Penny said. She became pregnant with their son, Fisher, in January of 2009, and he was born on in October. Fisher is now seven years old and is in first grade at The Island School. He went to Adventures Preschool on Placida road before starting at school on the island.

After moving to Boca Grande, Penny worked at Fugate’s as a ladies manager and buyer for six years. She stayed at home with Fisher on the weekdays and worked mostly on the weekends for a while. She’s also worked at The Barnichol Hardware Store on the island, starting in 2015 for about two years. Then she heard about the opening of her current position at Ariel, Ltd. and decided to apply for that job. She started working there in November and said she really enjoys being a part of the Ariel team.

“I’ve been here for just over two months, and I hope to be here for a long time. The hardware store was an amazing experience, and it was a lot of fun, but this relates more to my knowledge and background,” she said. Penny said her favorite part about working at the store is “being surrounded by pretty things all day.”

She said her customers are great, and she enjoys talking regularly with the shoppers.

“After working on the island for so many years, I feel I know almost everyone here,” she said.

Penny has one sister, Beverly, who was born in Florida and is eight years younger. Beverly lives in Yulee and is learning to be a farrier.

“She trains horses, give lessons, cares for them and manages the barn. She also has a horse and participates in competitions. She is extremely happy – she’s doing just what she wants to do,” Penny said.

Beverly has one daughter, Clara, who is two years old.

“We each have one, so my parents are very happy – they have a grandson and a granddaughter,” Penny said. She said Fisher and Clara are very close cousins. “Fisher just loves her – she is his favorite person in the world. He always asks when he can see her next,” Penny said.

“Sissy was my grandma’s dog, and she was named after a cousin who gave the dog to her.”

The dogs are both 12, one being just a couple of months older than the other.

“Pickle was our dog, and we had a Lab that passed away a few years ago. I told my grandma that if Sissy ever needed a home, she could be Pickle’s sister. So my parents kept her for a couple of months and then I went up and got her.”

The two dogs get along very well. “They’re like an old man and an old lady. They keep each other company while we’re gone during the day,” she said. When she is not working, Penny enjoys belly dancing. She started practicing it in Naples when a friend wanted to take a class.

“I thought she was crazy, but then I went to the class and I loved it. I stuck with it for a few years, but then I had a hiatus when I had Fisher. And also I couldn’t find any local classes.”

She just recently started dancing again a year ago.

“The funny thing is, when I finally found a studio offering classes around here, it ended up being the same teacher I knew from Naples,” she said.

“I enjoy being creative, and upcycling is a good thing. Nothing gets wasted. I have lots of supplies. I have a craft room that is pretty full.”

She also enjoys reading whenever she has some spare time.

Chad is a charter captain, and he and Fisher are avid fishing enthusiasts, but it’s not Penny’s first choice of things to do on her free days. Photography is still one of her favorite hobbies, but she admits that she takes most of her photos using her phone these days.

“When I was in college it was mostly still film, and I had my own darkroom. But now, most newer phones take very good photos, and they’re so convenient to use.”

When asked about the person she admires most in life, Penny said she couldn’t choose between her husband and her sister, since both of them have been so important in her life. “

I admire them for different reasons, so it wouldn’t be fair to choose one,” she said.

Penny typically works Monday through Friday at Ariel Ltd., and she works one Saturday every month. The next time you’re shopping on the island, stop in and say hello.