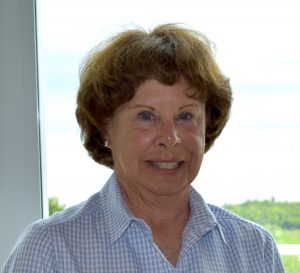 Kathy Berry has been working hard for the past several months to make sure that the annual Boca Grande Bike Parade & Woman’s Club Spring Fair taking place this Saturday, March 30 will be a successful event and enjoyed by all.

Kathy is president of the Boca Grande Woman’s Club, which sponsors the spring fair each year. She’s been involved with the Club since 2007.

The Club was organized in 1948 by 25 women who were interested in improving their community, state and country. Club members are volunteer workers who enrich lives by helping to build a better all-around place in which to live.

On an annual basis, the organization generates approximately $500,000 to $600,000 a year, split pretty evenly between Boca Bargains’ net income and Gala net proceeds. This money funds $300,000 in scholarships and more than $200,000 in grants to the community.

“It’s an amazing organization,” Kathy said. “All the women work very hard. Vicky Winterer will be taking over as the next president when my term ends, and she is going to be phenomenal.”

Kathy was born in Savannah, Georgia. Her family moved to Augusta when she was in first grade, and then later to Atlanta.

“But in many ways I still call Savannah home,” she said. “We still go back there … four generations of my family are buried in Bonaventure Cemetery.”

Kathy attended Georgia State University and earned a bachelor’s degree in journalism and marketing. She continued on at GSU and received an MBA.

She chose journalism because she always loved to read and to write.

“I was always involved in everything in school, so I just naturally became the ‘reporter.’ ”

Her career began with Georgia Press Association when she was straight out of college. She remained there for 20 years, serving as the organization’s executive director from 1979 to 1993. For two years she held the position of Southeast sales manager for American Newspaper Representatives, Inc., a national affiliate.

“We ran a nonprofit 501(c)3 foundation which funded journalism scholarships, and we also ran the profit corporation side which placed advertising in newspapers,” she said. “It was interesting – there was never a dull moment.”

Kathy met her husband Dennis while they were both working in the newspaper business. Kathy was managing the Georgia State Press Association, and he was at the

When Dennis left the paper to run other operations for Cox, he eventually became CEO, and their jobs were considered to be conflicting, so after 20 years with the statewide association, Kathy decided to retire.

“The organization was composed of more than 200 daily and weekly newspapers,” she said. “There were many, many responsibilities. After 20 years of coordinating the annual conventions and better newspaper contests … I was ready for a break.”

Kathy said Cox Media Group once was a newspaper, radio and broadcasting company, but they have been slowly selling all of their newspapers due to online media.

“Many people didn’t realize in the late 1990s that classified advertising was a large part of a metropolitan daily, but it turned out it was,” she said. “When they lost the real estate and the automotive advertising and the help wanted sections, it all went to the internet, and that was the beginning of the end. That’s why the smaller dailies and weeklies have continued to do somewhat better, because they still rely on those advertisers.”

She was alarmed by an article she read recently about the demise of smaller newspapers.

“All of the reporters who cover local government and school boards were letting elected officials know someone was watching what was going on … and now that’s going away,” Kathy said.

She represented the industry as a lobbyist at the Georgia General Assembly, focusing on laws regarding freedom of Information Issues.

“That was a big part of my job in Atlanta – it was a real battle to get those laws passed and kept.”

After retiring, Kathy spent much of her time involved in community service. She served on the boards of the Piedmont Park Conservancy in Atlanta from 1992 to 2005; United Way of Atlanta from 1998 to 2003; Achievement Rewards for College Scientists from 2002 to 2015; and the Georgia State University Foundation, to name a few.

“I always felt it was important to support education and preservation.”

Kathy and Dennis both grew up in Atlanta. In high school she was friends with his sister, but Dennis was six years older, so their social paths never crossed.

Kathy and Dennis were married in 1990, and they’ll be celebrating 30 years of marriage next year.

“They’re all good kids, and they all work very hard.”

Kathy and Dennis have four grandsons: Zack, Garrett, Reese and Robert; and one granddaughter, Poppy, who is two. Her full name is Charlotte Penelope, and she’s named after Dennis’s mother. Another baby boy is expected in September.

“We have enough for a basketball team and one cheerleader,” Kathy said with a laugh. “And they all love Boca Grande.”

Kathy and Dennis were introduced to Boca Grande in the 1990s. They began coming for a week after

They purchased their home in Boca Bay in 2005, when Dennis retired. They spend at least six months of the year here, boating, fishing, playing golf and tennis and enjoying all the activities on the island.

Kathy’s other hobbies include Pilates, pickleball, needlepoint and studying her family roots.

Over the past few years she researched and published three books on her ancestry, tracing back to her grandparents and great-grandparents when they moved here from Germany.

Kathy has enjoyed working with the Woman’s Club and said they are a phenomenal group of volunteers, and the organization has a tremendous impact on this island. She discovered the Club while playing tennis with some ladies and they mentioned they needed more volunteers at the

“It sounded like something I really wanted to be a part of … so I volunteered at the Spring Fair in 2007 and realized how much good the Club does for this community.”

The Club currently has 364 members (160 active), and the women are responsible for organizing the annual fair (happening tomorrow), the dog show, the Christmas tree lighting and other events.

“Boca Bargains and the annual Gala are our main fundraisers. We host the fair each year to bring families

together in the community.”

Kathy and Dennis spend summer and fall in Western North Carolina, and they’ll return to Boca Grande in November.

“We just love it here, and we’ve made some really great friends. We really treasure them. Boca Grande is a very unique place.”

Now that she will be wrapping up her term as president of the Woman’s Club in April, she still plans to remain on the board, but she’s looking forward to having more time to continue to research her family history, as well as look into tracing Dennis’ family roots.