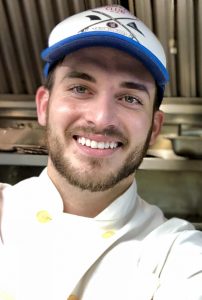 BY SUE ERWIN – Josh Freeman was born and raised in Boca Grande. He started working at PJ’s Seagrille as a busboy when he was 14 years old. Since then, he’s learned just about everything there is to know about the restaurant business.

“I worked my way up and have done just about every position in this place,” Josh said. “I have learned from some of the best people.”

His grandfather, Joe Freeman Sr., was born in Tampa and moved to Boca Grande in the 1950s to accept a job at the Port of Tampa phosphate docks.

“He was in control of all the imports and exports and all the resources that came into the port,” Josh said. “He was also a voluntary ambulance driver and my grandmother, Jewel, was president of the Boca Grande Woman’s Club at one point.”

Josh’s dad, Joe Jr., has owned a long-time painting business on the island.

His mother, Tyra, is a fourth-generation Floridian from Englewood.

“Both sides of the family have a lot of history in the area,” Josh said.

An athlete from a young age, he grew up playing Pop Warner football, baseball, basketball and soccer at the Englewood Sports Complex.

“My dad was my coach – he was always there, and he never missed one game.”

Josh was the starting quarterback for the Lemon Bay Manta Rays, with coaches scouting him from around the nation.

During his senior year homecoming game, he shattered his throwing hand during the first play. The back-up quarterback was injured at the time.

“I played the rest of the game with a shattered knuckle and a broken finger, and we ended up winning in double overtime.”

He was on the homecoming court, and you could see in the photos that his right hand was the size of a softball. During surgery that evening, it was also discovered he had suffered a concussion. The neurologist strongly recommended that he give up the game of football.

“I was supposed to play football,” he said. “I had a couple of scholarships lined up, but then I was injured and was never released to play … so it was a last-minute spontaneous move.”

Being a family-oriented guy, Josh found out he didn’t like being so far away from family, so he returned home. He ended up finishing his bachelor’s degree in applied science and healthcare at the State College of Florida in Venice.

All the while he was working at PJ’s Seagrille to help pay for his schooling. He would work the Christmas holidays, spring breaks and summer vacations on the island.

“Betsy (Joiner) would always find something for me to do, whether I was helping out in the kitchen or serving, and I always appreciated that,” Josh said. “There are about 10 of us here who have been working together for almost 15 years.”

Josh is currently the chef at the restaurant. He does the menu designs and also helps out with keeping the restaurant’s Facebook page updated. He’s worked to develop new appetizers and different varieties of burgers for the menu.

PJ’s Seagrille will officially close on June 30 due to the sale of the building. Josh is keeping his options open as far as what he chooses to do next.

He has previously worked at Miller’s, The Temp and some other places on the island and said the team at PJ’s is the calmest, hardest-working kitchen crew he’s ever seen. He said it’s like having another family.

“I work with an excellent team here,” he said. “My sous chef Derek is like my wing man. We are contemplating starting a business together.”

Josh enjoys working in Boca Grande because of the genuine people, and he is always happy to see the regular customers at the restaurant.

“The customers come in and wave and smile and say how much they love the food … it really brightens up my day.”

He’ll miss the days when customers would bring in freshly caught fish and ask the kitchen staff prepare it, which happens almost nightly during season. And also the camaraderie of working with J.T., Patty and Pete in the kitchen.

“He’s inspired me in so many ways,” Josh said. “He’s in Tampa now, and he works for a marketing company.”

Keith owns a landscaping business called “Native Landscaping,” and almost 95 percent of his work is done on the island.

Kelly is the pantry cook at PJ’s. She makes the salads and appetizers.

Growing up, Josh recalls coming to the island with his dad and fishing from the docks while his dad worked. He also participated in the island summer camps and remembers the many fun field trips he took with his friends under the leadership of “Jungle Joe” at Lee County Parks and Recreation.

He caught his first tarpon a few years ago with Capt. Jimmy Robertson aboard the “Julie Jean.”

“I’ve caught just about every kind of fish, five different kinds of sharks, but that was just an exhilarating experience,” he said.

As a kid, Josh was friends with Betsy’s grandson Austin and spent many days fishing with him.

“As soon as the sun set, we’d just be engulfed by mosquitos – it was so bad,” he said. “I can’t even imagine how my grandfather lived with no air conditioning and all those bugs.”

His father grew up on Wheeler Street and told him of times when people could camp out on the beach and drag race through town.

Josh currently lives in North Port with his girlfriend, Melissa.

They ended up running into each other down the road at a restaurant and started dating.

They have a three year-old daughter, Everly.

“She’s quite a character – she definitely inherited her dad’s facial expressions.”

When he is not working, Josh enjoys playing golf, going boating and fishing. And of course, other sports. He’s played in flag football leagues and hopes to eventually coach youth football in the future.

The family went to Disney World for vacation last summer.

“It was exciting seeing my daughter run around and talk to all the characters … it was really cute.”

His mother is the oldest of ten siblings, which makes it hard to go anywhere in the area without running into family members.

“Josh has done an amazing job through the years, but this year he really took it by the reins and has created a great dining experience for all our customers,” said Betsy Joiner, manager at PJ’s. “He’s a very special, hometown young man.”

Be sure to stop by PJ’s Seagrille for a few more delicious meals before the restaurant closes, and send a smile to the friendly kitchen crew to let them know how much they’ll be missed.