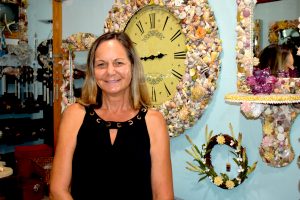 Cheryl Miller has been collecting shells in Boca Grande for many years. She and her husband Bruce were reacquainted with the Island in 2002.

They lived in Naples then but soon found themselves spending every possible spare moment on the island.

Cheryl collected over 10,000 shells in a ten-year period. She would clean them, categorize them and store them, knowing that one day she would want to do something special with them.

Cheryl was born in Connecticut, but her parents moved to Port Charlotte when she was ten. Her parents were both teachers in Charlotte County, and Cheryl graduated from Charlotte High school in 1972.

After graduating from high school, Cheryl knew college wasn’t something she had interest in and tried a few different career paths. It was in 1980, when she and her husband moved to Naples, that she decided to learn a trade.

Her favorite uncle was an electrical contractor in Connecticut, and that gave her the spark to learn that trade. She started as an apprentice, working on a 21-story high- rise.

After the president of the company that she worked for made a visit to the job site, he asked her some questions about a blueprint she was working on.

“Before I knew it, I was shipped to the office,” she said. The owner had a long-time dream to have a woman as an estimator, and she was chosen.

The company had several male estimators, and she was quickly told by the chef estimator that she was making a huge mistake: She would never be recognized as a female estimator. With that said, she went to work learning all she could, and after about a year she was bidding and was being awarded jobs.

In 1986 she went into business as an electrical contractor. Her partner did service work and she did new construction and remodeling. In 1992 she finally took the Electrical Master exam and received her master license.

“Estimating was my passion for many years, and I was really good at it. It took time, but over the years I was able to work with contractors I wanted to work with and do budgets and preliminary bids with architects and engineers. At one time we had 65 people employed.”

When construction slowed in 2009, she decided she just didn’t have it in her to bid jobs at a low cost and try to make them work. She and Bruce had already decided years before that they ultimately wanted to end up in Boca Grande. In 2010 she sold the business to pursue a new adventure in Boca Grande.

It wasn’t all that easy. In 2011 she had the task of dealing with breast cancer. Everything was put on the back burner. As one task was worked through, another would pop up. It took seven years to finally make it to the island.

Bruce was born and raised in Punta Gorda. His mother is in Captiva. Bruce is a backwater fishing guide in Everglades City. Cheryl said that he is very supportive of her new passion and has been her rock in putting together the store.

Cheryl and Bruce have three daughters together. They raised their girls on the water. They were on the boat fishing, swimming and shelling every Sunday.

“My daughters were taught to fish with artificial bait, and we were a catch-and-release family. I think my daughters are better anglers than most men,” Cheryl exclaimed.

Their three daughters are now all grown, and they are all teachers.

“Our children have given us the best gift life could bring – five grandchildren.”

Rachel and Nate live in Port Charlotte and have a son, Gavyn, two and a half.

Amy and Andy live in Naples and have a daughter, Isla, six, and a son, Gunnar, four and a half.

“It has been wonderful to have them all so close and to be able to watch them grow. They are truly a gift,” Cheryl said.

Four years ago, Cheryl found herself in a downswing, but she came up with a whole new career.

“My daughter brought me a mirror and asked me to create something for Isla with all the shells I’d collected. That started a wonderful new passion. All the feelings I had of being on the beach in Boca Grande for years collecting shells came alive in me. I found myself. I was inspired.”

Cheryl worked on many pieces before opening the store. Some took over four months to design and create.

Finding a name for the store was very easy. All Cheryl’s art pieces are made to inspire people. The sunset photo used in her logo was taken in Boca Grande at a fundraiser cancer walk in 2012. She never got to walk in the fundraiser. Her granddaughter was born one week prior, with injuries at birth. Cheryl spent the next week at the children’s hospital in Miami. The pictures did raise some money for the walk and have a special meaning in her life. She has been told that her logo looks like it should represent yoga.

Cheryl feels that being on the water with the beautiful sky is about as close as you can be to heaven. Her granddaughter is now five, and with extensive therapy, “she is perfect.”

On November 4, Cheryl opened “Made To Inspire,” located at 333 Park Avenue on the island. It’s a unique gallery, garden and gift store.

During the grand opening, she was welcomed by many residents.

“It was just overwhelming,” she said. “The kindness and support I received were just amazing.”

Upon entering the shop, guests

become quickly absorbed with artistic pieces consisting of shell art created by Cheryl, as well as beautiful handmade textile jewelry from a jeweler in New York whom Cheryl met at an art show. She strives to have as many handmade items and artists’ works in the store as possible.

Cheryl is truly an artist, and she hopes that her work inspires people to feel the serenity and the beauty we are blessed with.

“Boca Grande is truly magical,” she said. “It is hard to explain or understand until you have experienced this wonderful island and the people. It is amazing that so little has changed since I came here as a child. It has grown and is more populated, but the people have maintained the integrity and history of the island.”

Cheryl and Bruce live off island right now, but she is hoping to find a place on the island this summer.

“I really miss it,” she said. “I had a Portuguese water dog, McGee, and we would ride around in the golf cart, go to the dog park and walk the beach every day. I don’t think I missed a sunset on the beach. I can’t wait to be able to do that again and be a part of this magical island.”

Now that she’s in Boca Grande almost daily, Cheryl truly feels like she is home. She realizes that her business is new, and it will take some time to become established and be visited by regular patrons.

“I feel really blessed to be here, and I am so happy we made the move,” she said. “My passion now is trying to create some special pieces which I hope people will love as much as I do.”

The next time you’re looking for a unique island gift made with love in Boca Grande, stop by Made To Inspire at 333 Park Avenue and meet the maker of some beautiful handcrafted pieces.