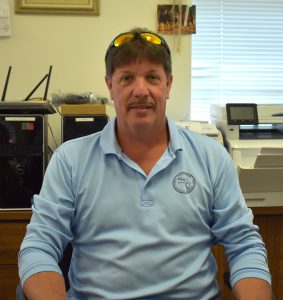 Brian Darna remembers going fishing with his uncle, Capt. Babe Darna, many times when he was a teenager. He specifically recalls catching a 132-pound tarpon that took him more than 30 minutes to bring to the boat.

“We used to come down in the summer and my dad would bring us down for Tarpon season, and we’d stay with my grandmother,” he said. “My uncle was always guiding, but he would set some time aside to take us out fishing.”

Capt. Babe recently moved off island. He still continues to do some guiding, but plans on cutting back.

Brian grew up in St. Louis, Missouri. After graduating high school, he moved with his parents to southwest Florida in 1987.

Both sets of his grandparents lived in Boca Grande as well as two of his uncles.

Brian is the service manager at Statewide Pest Control on the island. His uncle Babe started the business in 1987 with Bobby Sullivan. In 2004, the company was taken over by Bobby’s brother, Jackie Sullivan.

“My dad came from a family with a long list of fisherman,” Brian said. “My grandfather (Louis) used to fish for Whidden’s and Miller’s Marinas. He was born at Lee Memorial Hospital and lived in Cayo Costa. He took the boat across the pass every day to go to school.”

Brian said back then, Cayo Costa had just a few old fishing shacks and no running water or power.

His family eventually moved from Cayo Costa to Boca Grande to a home on Tarpon and Waterways.

When he first moved to Florida, Brian worked with a friend in the construction field in the Miami area.

He worked there for about a year and then Hurricane Andrew came along and ruined that plan.

So he returned to Boca Grande and found a job at PGT Industries in Venice. He worked there from 1992 until 2004. He started out as a manufacturing technician and eventually become a manager on the impact line overseeing about 20 employees.

“After the hurricane I went back to installing windows and worked for a couple different companies,” he said. “There was plenty of work to be done in the area at that time.”

Brian’s mom, Ellen, lives in Englewood. His father, Louis, was a well-known man throughout the island community. He passed away last November.

He started out working as a treatment technician and is now is charge of 5 technicians at this time, 3 who work in the Boca Grande office, one in Arcadia and one in Clearwater.

Brian has one sister, Carrie, who just recently moved back to the island from Colorado. She is married to Capt. Keith Johnson. Keith was a local captain on a popular vessel for many years, but he is retired now.

“My mom is very happy that we’re both living here again,” Brian said.

“You can’t use certain products when it’s too hot out or when there’s been too much rain, because they’re temperature-sensitive,” he said. “The workload really doesn’t change throughout the year because there are always issues with pests in Florida — especially with ants.”

When he is not working, Brian enjoys racing his 1999 Cobra Mustang at Bradenton Motor Sports Park.

He also fishes from time to time, but his real hobby is racing.

Brian does a lot of the work on his car himself, but he also has a good friend who is a mechanic and helps with maintenance and repairs.

“I’m really a family oriented guy so when I’m not working, I’m trying to spend as much time as I can with my kids and grandkids,” he said.

Brian currently lives in Rotonda and he has three children: Kyle, 26, Juliana, 19 and Nikole, 14.

Kyle worked at Statewide as a technician for a while before Brian worked there. He lives with Gainesville now and has two daughters: Ayala, 2 and Alexa, 1.

“They come down and visit whenever he gets time away from work,” Brian said. “They were here just before the holidays last year.”

Juliana lives in Rotonda and Nicole is a freshman at Lemon Bay High School.

Brian said the person he admires most in life is his mom.

He is not a fan of cold weather, saying that the reason he chooses to stay in Florida is because he doesn’t like northern winters.

“I don’t like snow – I’ve experiences 18 years of it and that was more than enough,” he said. “The winter of 1982 was probably the worst I have ever experienced. We had eight to nine foot drifts and it was 30-below zero. Right then and there I made up my mind that I wanted to move someplace warmer.”

As irony would have it, the first year Brain moved to Florida, it snowed.

“I couldn’t believe it,” he said. “I was at the Shell station pumping gas in 1989 in Englewood and I saw flurries. It didn’t accumulate but I was still completely shocked.”

Brian has many friends in St. Louis and still enjoys going up to attend Cardinal’s baseball games.

He’s moved around Florida numerous times, but has no desire to leave the state permanently.

If you’re dealing a problem with pests in the area, trust you’ll be in good hands with Brian’s crew at Statewide.