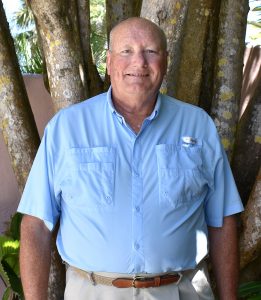 “I approached him and told about my background in music, and he welcomed me to the group,” Bill said.

He assisted Kimberly Whipple, who produced the last four musicals for RPP. “That included doing some background work, scheduling the rehearsals, getting the scenes set and organizing things for the show.” He made his acting debut in RPP’s original show, “Boca Girls.”

“I think Royal Palm Players is a quite a wonderful community theater,” he said, “It’s a great way to get to know people in the community and make new friends.”

Bill has been playing drums since the fifth grade, and he’s been doing professional gigs since he was 14 years old. He recalls his mother dropping him off at bars where he would meet with bands that needed a drummer for that evening.

As a kid, he dreamed of one day becoming a professional musician, but as he got older, he realized there were many fantastic musicians in the world, and just a few were able to make good money as performers.

He played in a variety of bands, starting in high school and then for jazz bands while he was in college. “That’s really when I was hooked, because I had the chance to play with some really good musicians.”

One of the more memorable engagements he participated in was playing background music for ecdysiasts, better known as striptease performers. “That was probably the easiest and certainly the most entertaining job I’ve ever landed,” he said with a grin.

Bill’s prior experience with Broadway musicals has mostly involved loving them as an art form and performing in small productions as a percussionist in “pit orchestras” – types of orchestras that accompany performers in musicals, operas and ballets.

He’s played in circus bands for three-ring Shriner circuses around the country. “Those were done in 10,000 seat stadiums … being a drummer in a big circus is so much fun.”

He was also in the Swing Band Musicians Union in college and would often perform gigs on the side to earn some extra income.

During the summer months, he plays in cocktail jazz groups and with adult contemporary rock ‘n roll bands on Cape Cod. “It’s fun – I really enjoy it,” he said.

Bill is originally from Woodward, Iowa, a small town west of Des Moines. His father was a pharmacist and at that time, most pharmacies were independently owned. After working as a pharmacist for a few years, his father purchased a drugstore in a small town. “My dad, my mother and all of us kids worked at the store, so it was truly a family business,” he said.

After high school, Bill attended Iowa State University and earned a degree in computer science. He landed a job working on computer systems at a bank in Chicago. The bank he was working for at the time offered to pay for an MBA program, so Bill went on to earn a master’s degree in business and finance from The University of Chicago.

After earning his MBA, he went from computer programming to commercial lending and banking at the First National Bank of Chicago from 1970-1980.

Later he moved to Boston, changing jobs for the same bank where he focused on lending money to growing technology companies.

A few years later, Bill went to work for State Street Bank in Boston until he retired in 2010 after almost 28 years.

Bill met his wife, Nancy, through a mutual friend in Chicago. They have been married for 42 years. Nancy worked in human resources for Fidelity Investments. They have one daughter, Allison, who lives in New York and works in the public health field. Allison recently visited Boca Grande for a spring vacation.

Bill and Nancy were introduced to Boca Grande by some friends who had visited the island and raved about the natural beauty of it. They had never heard of the island before, but it was the last stop on a two-week road trip.

“We both retired at the same time, and we decided we wanted to be someplace warm,” he said. “So we took a road trip starting in coastal North Carolina, stopping at all of the interesting towns along the way, and we ended up here. Like many people, as soon as we drove over that second bridge I knew that this would become home.”

They started coming for a few weeks regularly every year, and then for a month and eventually for the season.

When he is not working, Bill enjoys golf, reading and travel. He and Nancy are currently planning to go on the Friends of Boca Grande trip to Bordeaux, France, where they will explore the charming village of Tremolat for a week.

“He writes travel books, and one of his books, ‘The Thunderbolt Kid,’ is about growing up in the Midwest.”

Bill is also on the RPP finance committee, and he’s part of the Friends of the Boca Grande Community Center committee that selects live musical acts for the island. Some of those include the “All that Jazz” shows and the “Coconut Cabaret” performances.

Nancy is on the board of the Barrier Island Parks Society. She was the chair for the recent “Green Gala” party, which is the biggest fundraising event of the year for the organization.

She plays golf as well and is also a competitive bridge player.

In May, Bill and Nancy will head up to Cape Cod, where they spend about six months of the year.

Bill has been busy recently with planning events and performances for the 2018/2019 RPP season. Look for updates on those shows this coming fall in the Beacon, or visit royalpalmplayers.org for more information.