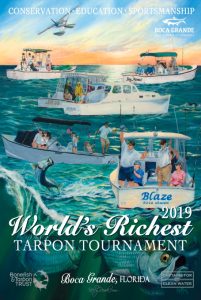 The artwork for the 2019 World’s Richest Tarpon Tournament hit the streets last week, and it still has people tearing up a little bit.

According to Boca Grande Chamber of Commerce Executive Director Wesley Locke, artist Kelly Reark put a lot into this one.

Capt. Mark Futch’s seaplane can also be scene at the top of the artwork, tipping its wings to the captains in the Pass as it flies into the sunset.

“The Boca Grande family fleet makes this tournament what it is,” Locke said. “This past year was difficult to process with all of the loved ones lost. World’s Richest is honored to have some of our “Setting Sons” captured in this work. Thanks to Kelly for all of her hard work … the spirit of the Boca Grande Pass is woven in every fiber of this painting.”

Reark said creating the piece brought her back to her many times in the tarpon chair, and the memories she made there.

“Every single one was an event shared with friends and loved ones that I truly cherish,” she said. “Fishing is as much about people and relationships as it is about the fish. Much love to all who are part of this incredible fishery that is Boca Grande. You are my ‘Richest’ memories.”

The captain’s party for the tournament will be held on Wednesday, June 5 from 6 to 9 p.m. at The Gasparilla Inn Beach Club.