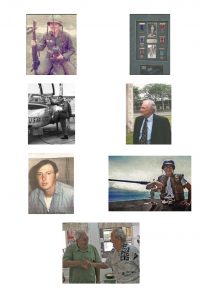 This week and next week we will be taking time to honor those who have fought in the service of our country, living and deceased, and who allow us to live as free Americans because of their dedication. By the way, this year is the centenary anniversary of the last year of World War I.

Thank you, so much, to all who have served.

Petty Officer Richard Hugger served in the U.S. Navy from 1970 to 1974 as a signalman onboard the U.S.S. Inchon, LPH-12 (amphibious helicopter carrier). The ship carried approximately 300 to 600 marines.

The ship rescued downed pilots and B-52 bomber crews at the end of 1972.

Richard served in Vietnam from 1972 to 1973, and was part of Operation End Sweep in 1973 that swept for mines in Haiphong Harbor.

The task force had to pull out of Gulf of Tonkin to avoid a typhoon. The anemometer blew off the mast at 135 mph. Most of the sailors and marines on the ship were seasick during the storm.

At the age of 27, Daly Walker had just completed his internship at Indiana University when he received his draft notice. He served during the Vietnam War in 1967 and 1968 as a battalion surgeon with the 9th and 25th Infantry Divisions, treating both GIs and Vietnamese civilians in the rice paddies and villages along the Cambodian border.

A recipient of the Bronze Star, he returned to the University of Wisconsin at Madison for surgery training during the height of political unrest and anti-war sentiment.

In 1991, 25 years later, Dr. Walker returned to Vietnam as a volunteer to lecture and work with Vietnamese doctors in hospitals lacking modern medical equipment and sanitization practices. He, along with two other Vietnam vets, began a discussion that resulted in the dedication of a new bridge in Columbus to Vietnam veterans.

A memorial was built on the County Courthouse lawn in Bartholomew County, 25 limestone columns inscribed with the names of those who were killed or died in wars of the 20th and 21st centuries. Dr. Walker was honored at the dedication of the memorial and was given the Patriots Award by Columbus, Indiana for his role in the establishment of the monument.

Dusty Hopkins enlisted in the U.S.

Air Force in 1969 and went into pilot training in Big Spring, Texas. Hopkins got out of the Air Force after Vietnam.

His daughter, Tricia, was born while he was in the Air Force and stationed at Kincheloe Air Force Base in the upper peninsula of Michigan.

Dusty is a resident of Boca Grande dand owns the Boca Beacon and Gasparilla Magazine.

Pictured below off Da Nang harbor in 1969 on the U.S.S. Boston 69 (heavy cruiser). Skip was a photographer’s mate 3rd class. “It was our first day on the gun line firing navel gunfire support for the grunts inland. That’s Monkey mountain in the background.”

In early 2015 Beverly, myself and brother Walter were just starting dinner at the “Pink” when John Bourgoin walked in. I introduced John to my brother, and said he was in the 3rd Division in North Africa under General Patton. As it turns out, John was, too. After trading many stories and similar experience, it wasn’t long before you could see they had bonded.

Walter passed in Oct. 2015, a month before his 91st birthday. John passed in September of 2016 at 94. They are both missed, and we are grateful for their service. Thank you to our heroes, one from America, one from France!

Sgt. Bubba Russell served in Vietnam from December of 1965 to December of 1967. He was a skytrooper and served as squad leader with Company B, Second Battalion, Seventh Cavalry in places such as Song Mao and Phan Thiet.

He received two air medals for helicoptor combat flights over a year’s time, received the Vietnam Service Medal, the National Defense Medal, the Army Commendation Medal, three Purple Hearts and the Bronze Star “V” for valor. When Russell’s squad was pinned down near Song Mao by fire from five enemy soldiers with automatic weapons, Russell exposed himself to heavy fire as he directed bursts of return fire, overwhelming the enemy. He then led his men in an assault on the fleeing enemy, killing one and aggressively assaulting another position, killing three more enemy soldiers and capturing one.

He currently lives in Davis Junction, Illinois and is the father of Boca Beacon and Gasparilla Magazine Editor Marcy Shortuse.

See next week’s Boca Beacon for Part II of our Veterans Day pages.