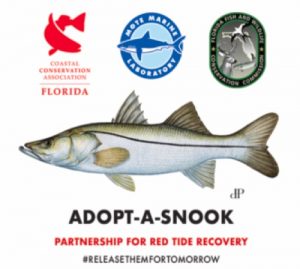 The Coastal Conservation Association Florida (CCA Florida) is partnering with the Florida Fish and Wildlife Conservation Commission (FWC) and Mote Marine Laboratory to address the loss to the snook population on the Southwest Coast as a result of the red tide event.

The two-year initiative includes raising and releasing 10,000 hatchery-reared juvenile snook along Florida’s Southwest Coast and will launch in April 2019 following the Florida red tide bloom once waters are determined to be safe. Fundraising for the program, a cost of over $440,000, will include outreach to the community through an Adopt-A-Snook program and the formation of additional private nonprofit partnerships.

“Anyone who lives or fishes the Southwest Coast understands the devastation our fisheries are seeing from this red tide, and it’s our duty to address the issue,” said Brian Gorski, CCA Florida’s executive director. “Snook are an iconic fish to our state, and we are extremely excited and honored to partner with FWC and Mote to help recover this fishery and enhance it for future generations.”

Snook are one of the most sought-after catches by anglers in Southwest Florida, and they return to the same beaches to spawn annually during summer. Unfortunately, summer was also a peak time for red tide toxins along the beaches of Gasparilla and Little Gasparilla Islands.

“The continuing impacts of red tide in Southwest Florida are evident to all of us who call these communities our home,” said Dr. Michael P. Crosby, president & CEO of Mote Marine Laboratory. “One of the potentially most devastating and highly visible impacts around Charlotte Harbor was to the spawning snook population. Many of the dead snook were laden with eggs to produce the next generation. Governor Scott and our partners at FWC quickly called on Mote and provided our fisheries scientist with the resources to conduct a rapid snook population impacts assessment, but much more needs to be done to ensure the recovery of this iconic species. That is why we are proud to partner with our colleagues at CCA Florida and FWC to launch the Adopt-A-Snook partnership for red tide recovery.”

With support and partnership from CCA Florida and FWC, Mote will locate and restock juvenile snook to specific tidal-creek “nurseries” that would usually be supplied by spawning aggregations hit hard by the bloom. Each of the hatchery-reared snook will be tagged with passive integrated transponder (PIT) tags to allow Mote scientists to monitor the progress of the juveniles throughout the study, which includes monthly stocking efforts designed to elevate the system toward its carrying capacity. Decades of intensive snook aquaculture and sustainable stock enhancement research give the State of Florida the ability to respond rapidly to a significant impact from red tide through this partnership effort.

Governor Scott said, “As our communities continue to be impacted by this year’s red tide, we have provided all available resources for response and recovery. I’ve directed $9 million in grant funding for local communities as well as funding for Mote Marine Laboratory to assist in animal rescue efforts and funding for VISIT FLORIDA to help businesses recover. We will continue to do everything we can to support our coastal communities that are being impacted.”

“We appreciate the leadership and support of Governor Scott to increase our efforts to help the communities affected by naturally occurring red tide,” stated FWC Executive Director Eric Sutton. “FWC and Mote have a decades-long partnership with snook research and recovery, and we are pleased to be a partner with CCA Florida, Mote and the community to enhance this effort.”

In addition to the stocking enhancement initiative, the organizations are encouraging anglers to help the snook and other inshore populations by releasing their catch. This summer, CCA Florida launched the “Release Them For Tomorrow” campaign as a way to support several species’ growth through catch and release, including snook. “It is going to take everyone doing their part to get our fisheries back to health,” stated Gorski. Anglers are encouraged to share the message by tagging their social media photos, comments and messages with #ReleaseThemForTomorrow to show their support. Anglers can become engaged by joining CCA Florida at JoinCCA.org. For more information, visit the Facebook page or ccaflorida.org.

CCA Florida was founded in 1977 after drastic commercial overfishing along the Texas coast decimated redfish and speckled trout populations. One of 19 state chapters, CCA Florida became the fifth state chapter in 1985. A 501(c)3 nonprofit organization, CCA Florida advises and educates the public on conservation of marine resources. Through habitat restoration projects, water quality initiatives and fisheries advocacy, CCA Florida works with its over 18,000 members, including recreational anglers and outdoor enthusiasts, to conserve and enhance marine resources and coastal environments. Join the conversation on Facebook or learn more at ccaflorida.org.

Mote Marine Laboratory & Aquarium is an independent, nonprofit 501(c)3 research institution founded in 1955. Mote began and flourished through the passion of a single researcher, Dr. Eugenie Clark, her partnership with the community and philanthropic support, first of the Vanderbilt family and later of the William R. Mote family.

Today, Mote is based in Sarasota, Florida, with five campuses stretching from Sarasota to the Florida Keys. Mote has more than 20 world-class research programs studying oceans locally to internationally, with an emphasis on conservation and sustainable use of marine resources. Mote’s vision includes positively impacting public policy through science-based outreach and education. Showcasing the Lab’s research is Mote Aquarium, open from 10 a.m. to 5 p.m. 365 days a year. Learn more at mote.org.

Florida Fish and Wildlife Conservation Commission’s mission is to conserve fish and wildlife resources for their long-term well-being and the benefit of people. Florida’s fish and wildlife belong to the people of Florida, and the FWC is entrusted to take care of these precious resources. The FWC protects and manages more than 575 species of wildlife, over 200 native species of freshwater fish and more than 500 native species of saltwater fish while balancing these species’ needs with the needs of approximately 19 million residents and the millions of visitors who share the land and water with Florida’s wildlife. Learn more at myfwc.org.